In 2007, my parents moved from their Saratoga Springs home of 45 years where I grew up to a one-story ranch.  Ranch houses are not common in Saratoga and they were pleased to find one they liked.  A bigger house than they needed, it enabled them to take almost all of their possessions.  This especially pleased my father, who didn't want to get rid of anything. After he died in 2018, my 94 year-old mother began to give the place a once-over.

She started by asking me to find homes for five sets of cross-country skis. "Someone could be using them," my mother said.  At that time, she found it difficult to come to terms with the fact that well-used outdated gear, even if in good condition, would not bring much money. Just finding someone who might continue to use and enjoy various items was my priority and that eventually became hers. 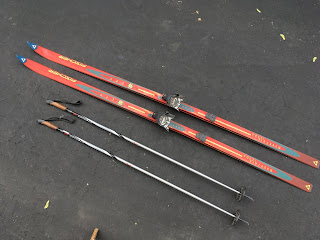 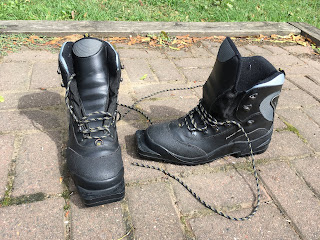 After I lugged all the skis, boots, and other smaller items to the Adirondack Mountain Club winter gear sale and brought them all home unsold, I tried the online gear swap sponsored by my father's favorite hiking group.  I got instant response.  I only made $35 for my mother, but recipients had plenty of enthusiasm.

Usually a few emails were exchanged with gear shoppers to find a meeting location.  Eventually, we could set up a time and place, often in the Yaddo Gardens parking lot.  One man said, "I used to ski and I want to see if I will want to get back into it now that I'm retired.  These will be just right and the boots fit!"  Another explained, "I just bought a camp up north.  I want a collection of gear for people to use who come to visit."  I told him that all of the items I had brought were free.  As he considered every one, he asked, "is this at the same good price?"  He was thrilled.

Over quite a few months, I have given gaiters to the Sierra Club silent auction, many many clothes to the RISSE, our local refugee center, knitting needles and supplies to UpStitch, a shop that sells donated yarn and fabric for a minimal price. Grassroots Givers accepts any housewares and has a huge library of used books, to which I have contributed.

Sometimes I have had to dispose of things such as toxic automotive fluids and paint cans that I took to our landfill's toxic waste day. And I have thrown some things out like curtain rods that no place that I have found accepts.  I've recycled AAA travel guides from the 1980s and 90s.

Still, I am convinced that, for most things, there is someone somewhere who can use my mother's no-longer-wanted possessions.  She agrees.


Selling a couple of my father's old rifles tops the sales adventure list.  Online, I found a gun shop not too far from Saratoga in the southern Adirondacks. I called the shop and made an appointment to visit.


On a nice late-summer day, my mother and I struck out for the back of beyond, guns on the backseat of the car.  The ride was very pretty as I drove a winding road through wooded terrain looking for the house number on a mailbox.  When I found an opening in the landscape with cell service, I called the shop from the car and stated that I was having no luck finding the shop. "But you are almost here!" the kind voice on the other end said. He gave me a few specific landmarks which led us up a wooded dirt lane to the house with its upstairs gun shop.

I parked the car, opened the back, and took out the rifles.  Then I walked to the other side of the car to help  my mother negotiate the uneven ground.  I held her arm with one hand and carried the rifles in the other.  A man in a pick-up truck parked next to me, opened his window and said,  "You ladies look great!"  Two white-haired women walking arm-in-arm, one with a cane and the other carrying guns -- quite the picture.

Inside, three older men, two behind two different counters, and one sitting on a stool working with hand tools, occupied the tiny but totally packed room. A glass case was filled with pistols, books lined a shelf, gun supplies and equipment were everywhere, along with a poster of Donald Trump and a picture of Andrew Cuomo with a red X across his face.  No sympathy for the Safe Act here.


I laid the rifles on the counter.  One of the men turned them over and studied the inscriptions.  Then he pulled a Blue Book of Gun Values off the shelf.  "Come on over here, and look at these rifles," the man called to another.  Turning to us, he said, "He's our history guy."

The second man said right away, "That one's a bicycle gun." We looked puzzled.  He told us, "A bicycle gun is the kind of gun a kid used to carry on his bike. He would shoot squirrels or other small animals from the bike."  I was struck by the vision of small groups of boys riding bikes one-handed holding loaded rifles in the other, but that sure sounded like my father.  In the 1930s, my father and his friends shot squirrels and rabbits near their childhood farms in Ontario.  They would take their bag of game to a fox farmer who paid the boys for any small animal that could be used as fox food. 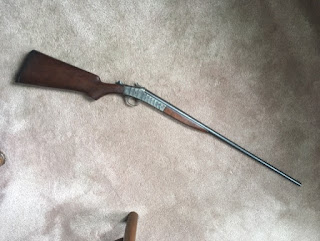 The first man made my mother an offer.  I started to respond, but she said, "I'll take care of this."  This new assertive side of my mother amused me.  She quizzed him a little about the price, making it clear that she might be old but she wasn't a pushover.  We walked away with $220 for the two guns.  My mother was very happy.

We took a hiatus from sorting for the holiday season.  But when January came, my mother took me back down to the basement.  "What can we do with these rugs? " she said.  Rolls of rug remnants lined an upper shelf.  I pulled a few down. When I came upon a piece of carpet from the old house that had been moved across town to the new house, I couldn't help exclaiming, incredulous, "You moved this with you?"

I emailed a friend who volunteers at the ReStore.  She responded that the store would not take rug remnants.  I left the rugs and moved deeper into the basement, poking around a closet.  I started hauling suitcases.  Turning to my mother, I said, "One time you said you wanted to get rid of these."  "Oh yes!" she said, "But do you want to get into that now?  That's lot to carry."  I turned to her with a sheepish grin, "I guess you caught me on a good day."

I filled my car with myriad suitcases and luggage, a small board for ironing sleeves, VCR tapes, a carton of drapes and curtains, and more.  On my phone, I looked up the hours of the Goodwill.  I could leave Saratoga and still stop there before they closed at 8 p.m.  With luck I would unload my car without the things ever ending up in my basement! 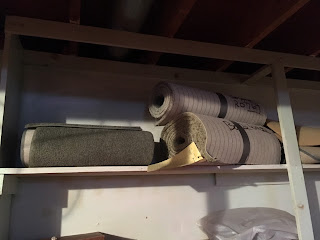 I was excited that Goodwill took everything I had brought. I called my mother when I got home.  "You are really a Volunteer Home Clearance Distributor," she said.  I laughed.  "No, you really are," she said emphatically. "It's amazing the way you find places for so many things.  You're a pro."

The next day when I talked to her again, she had had a call from a friend.  They had chatted about cleaning out.  "I want to tell her the names of some of the places where you take things. You really are a professional home clearance distributor,"  she said with a tone of great respect.

In just 24 hours I had risen from volunteer to professional.  Although the job doesn't pay and the work is very time-consuming, the reward is seeing a few empty spaces in a full house, and knowing that someone will use the things we are passing along.  Before you know it, I'll be driving a van  and wearing a bright yellow t-shirt with a business logo!