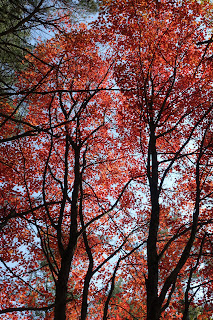 Haven't the red trees been beautiful?  I've been trying to figure out why reds have been so outstanding in this year's fall foliage.  I have decided that red fights the gray cloudy days better than yellow and orange, which, though lovely, have struggled against this autumn's dark skies.


I come by my infatuation with fall color honestly.  I inherited it from both of my parents and from at least one of my grandparents.  In October, I get outdoors whenever I can.

My friend, Deb, and I hiked Giant Mountain in Keene Valley on October 10.  Colors were at peak and the sun was out!  In fact, a photographer from I Love NY hiked alongside of us and took our picture in various locations. He preferred that we look away from the camera while pointing a finger towards something in the distance.  I asked him to take a picture of the two of us with the colorful view behind us.

He took our picture again as we walked across the bridge over the end of the Washbowl, too.  He asked us to look towards the water and its reflection of yellow trees.

The photographer left us after he took photos from this rocky ledge.  He said that he had never been to the summit of Giant, only going as high as he needed for pictures of the valley. He planned to go to other locations for more photos on this day of peak foliage.


When people ask me which Adirondack High Peak I recommend, I suggest Giant.  Open views abound.  Every time a hiker needs to stop and catch a breath, there's a viewpoint.  Nowadays, if you go, pick your days to avoid parking issues and crowds on this popular peak.  Deb and I were fortunate to hike on the Wednesday after Columbus Day.  We only ran into about a dozen people all day.


We spent time at the summit of Giant having lunch and taking pictures, and we stopped again at every rocky outcropping on our descent.  In fact, we began hiking from the car at 9:30 in the morning and got back to our car at 5:30, almost twice the time Giant usually takes, but, hey, why hurry on a rare day such as this?

However...it wasn't all leisurely.  We added an unexpected trail run for the last half-mile. In dense woods, I stopped and said, "What's that noise?  It sounds like a whiny truck, but it's not moving on."  Deb listened too.  "I think it's construction noise," she said.  The sound stopped briefly, but when it re-started, it seemed to be just over our right shoulders and it was LOUD.  We stared at one another and gasped, "Bees!"  "Swarming bees!!" "And very close!"  We took those final tenths of a mile as fast as we could, dodging roots and rocks at top speed.

When we reached cell service on the drive home, I googled "swarming bees" on my phone.  Apparently, they are not dangerous and are interesting to watch.  Regardless, the sound of tens of thousands of bees would still send me running. 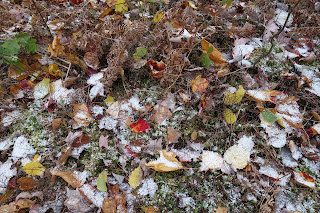 Exactly a week later, my friend, Linda, and I hiked Moxham Mountain in Minerva.  A dusting of snow and 28 degrees greeted us.  In just these past few days, shorts and t-shirts weather had changed to a need for long underwear and woollies!

Not only that, most of the colored leaves had fallen.  Those hillsides awash in crayon-box color, that Deb and I had seen as we had driven by Warrensburg and farther north the week before, had turned to gray.  The sky was gray too.

Despite this day's distinct November feel, Moxham is always a fabulous hike.  Although much easier and lower than Giant, it also has overlooks all the way to the summit.  We could see snow on Gore Mountain's ski trails and distant ridges of blue mountains.  Oak and beech trees, that keep their leaves almost into the winter, brightened the foreground.


The trail curves along a ridge.  Some of the exposed rocky overlooks faced the wind; others were more protected.

We admired lightly snow-dusted trailside ferns and dark hemlocks amidst the hardwoods.  Linda and I hadn't been out together beyond our neighborhood since February. What a treat to be here now.


Moxham's summit view is grand, expanding to nearly 180 degrees.  And blue sky -- what a surprise! We could see Snowy Mountain in the distance with its rocky face and snowy summit, and a few ponds and marshes immediately below Moxham's cliffs.

Despite the sun's arrival, the wind was brutal at the top.  We headed back down the trail, past the first overlook to the second one, out of the wind and with most of the panorama still in view. We spent an hour relaxing and soaking up the scenery.

All month, I had been watching the progression of color on the Northway from my Albany home to my mother's in Saratoga. Everyone I spoke with here or there, had an opinion on the quality of this year's foliage display. Some folks had been critical of the season for weeks: the colors were patchy, some leaves fell while still brown, some colored trees were dull, many were still green.

In many ways, they were right, but when the section of highway between Albany and Clifton Park, the halfway point to Saratoga, turned, it was spectacular.  I know every inch of this road and watch for the parts that will offer huge swaths of color, such as southbound exit 2W, the area near exit 6, and others.  I passed one section with at least six brilliant red trees in a group.  I always wish that I could get a picture of these road views, but driving at highway speed just doesn't allow for that!


Recently, I had time, after a music rehearsal in Saratoga, to go to the Saratoga Battlefield before returning to Albany.  Rain hit the windshield, slowing just as I arrived at the Visitor Center parking lot.  Clouds hung heavy.  I kept wishing for sun to "light up the color," as my father always said.

Rain had completely stopped when I headed out on the Wilkinson Trail, a 4.6-mile walk through the Battlefield.  It felt great to get outdoors, and damp fall smells filled the air.  And what happened next?  Sunshine again!

I have walked the Wilkinson Trail many times over my entire life.  Something struck me as odd.  I double-checked the trail signs. The entire trail direction had been reversed! When I returned to the Visitor Center, I asked about changes to the trail.  The ranger said, "The trail is the same, just in the opposite direction.  We decided that walkers should see the Battle of Saratoga from its first ambushes to the last in chronological order rather than the other way around.  It seemed to make sense to change the trail's direction."  It did make sense.

When I got home and looked at the pictures I had taken on the Wilkinson Trail, red trees appeared more pronounced in the dark picture.  Yet, on my return, when the sun was out, the yellow overshadowed the red in the same group of trees.  That's when I began to think that red outshines yellow in gray weather.


Not long after, I had an meeting in Latham, just a mile from Colonie Town Park. October was on the wane and I knew that my days were numbered for catching fall foliage.  Besides, a nor-easter was predicted for the weekend, forecasted to bring a wintry mix of snow, rain, and high winds.  Our leaves would come down.  I couldn't resist taking a quick walking tour of the park.

Colonie Town Park is fronted by the Mohawk River.  I walked for an hour along the river and through the woods.  A colored hillside dominated the view across the steel-gray water.  On the trail, the dark sky made deep hemlock forests even darker. 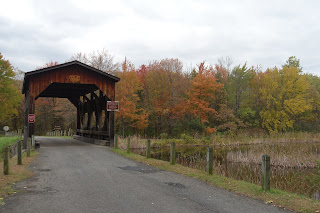 The trail eventually comes out to a narrow inlet and the park road's covered bridge.  Colorful maples and dry grasses framed the water and bridge. A red bench looked inviting where couple of red trees and a large orange tree dotted the curve of land and reflected in the water. On this dark day, the dominance of orange tested my red theory, but so what.  I loved it all. 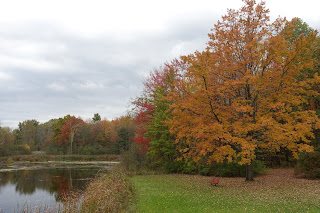 I drove the short distance home.  The sun came out and disappeared again.  Once at home, I heard rain hitting the windows.  Then a brightness flooded in my kitchen.  The sun had fought its way through the rain, and produced a new view.