Early in the year, I suggested that we plan a family weekend in honor of Bill's and my 40th wedding anniversary.  Our son, Thomas, and his wife, Marlie, and our daughter Meredith, and her husband, Brian, all responded with enthusiasm.  Even a small family has many schedules to work around, but we were able to settle on a weekend in October.

I was adamant about choosing a location that would be an easy travel destination for everyone.  The Catskills seemed a logical choice.  Thomas and I began checking HomeAway and Airbnb.  We found the Mountain House in Windham, a 5-bedroom house that boasted views and a pond.  Meredith and Marlie confirmed our lodging suggestion and the plans were set.

"We're going to Windham?" Bill said with hesitation when I put the dates on the calendar.  A native of Prattsville, just down the road from Windham, Bill does not long to "go home," especially now that we have no family to visit there.  This part of the northern Catskills would not have occurred to him as a getaway for a family gathering.  I hoped he would enjoy a new perspective on an old place.

A few days before the weekend, I said to Thomas on the phone,  "I'm wondering what we will do there.  Do you think we will get bored?"  Windham is, after all, known for winter sports or summer hiking, both of which we weren't likely to do.  Thomas said, "I'm not worried about it."  Okay, I wouldn't worry either.


Bill and I drove from Albany, Meredith took the bus from New York, and Thomas and Marlie, with little Hayden and Harry, drove up from their home in New Jersey.  Our only disappointment was that Meredith's husband, Brian, had had a recent change of schedule and would not be with us.

By early afternoon on Saturday, as five adults and two children, we began exploring our weekend house and grounds.  Indoors, huge windows and sliding glass doors offered a panoramic view of mountains, the pond, and trees. The spacious kitchen had all the amenities and the living space boasted three couches and a wood fireplace.

Outdoors, we gravitated to the leanto by the pond and the yard. Hayden and Harry quickly discovered spiders.  They were shocked but fascinated when I picked up a Daddy Long Legs so that they could have a closer look. Later I heard Hayden tell Bill, "Grandma picked up a spider."  From then on she found spiders in lots of corners and wondered if I would touch them.  "Only Daddy Long Legs," I said.


Because we had both little children and good cooks, we chose to have all of our meals at the house and brought food from home.  From the open kitchen, we could keep half an ear on the conversation,  an eye on the children, and still look out to the view.

As I prepared the manicotti that was Bill's and my dinner contribution, I saw three deer nibbling apples under the tree by the pond.  "Come look, Hayden," I called across the room. "There are deer eating the apples."  I lifted her up to the kitchen window to see.  Even from inside, we made enough noise to spook the deer.  They ate apples for a few more minutes and then scampered away, tails up.

On Sunday, we decided to go to Oktoberfest at Hunter Mountain. Bill took us on rural roads both to and from Hunter Mountain.  We saw new Colorado-style log houses as well as villages whose better days were long behind.  And always we saw colored leaves over rolling hills and mountains that reminded us why tourists have come here for fresh air and scenery for 200 years.


Oktoberfest is no longer the huge event that it was in years past when the long-time former owners brought in well-known musicians, and reveling continued well into the evening.  We were happy with the new, smaller, more low-key format.  We watched a German music and dance performance, ate a pretzel, kettle corn, or bratwurst.  Hayden had her face painted, and we saw dachshunds training for an afternoon race.  By 1:30, Harry needed a nap and we went back over hill and dale to Windham.

Thomas and Marlie planned and prepared Sunday's dinner.  With a choice of a gas grill on the house's deck, or a charcoal grill by the pond, Thomas dressed chicken with a Brooks-style marinade for the charcoal grill.  The sky threatened rain and clouds hung heavy, but did nothing to deter us from more time by the pond where we kept Thomas company at the grill. The aroma of barbecued chicken wafted across the property.

Monday's forecast predicted solid rain.  We could hear it pounding outside even before we got out of bed.  After breakfast we sat around visiting, playing with the children, and enjoying the views out the windows as the rain came down.


A few months before, while checking out bicycling in the Catskills, I had discovered the new 1.5 mile recreational path in Windham.  Although not long enough to bother bringing bicycles,  the Windham Path would be perfect for a family walk.  Yet, here we were on our last day with heavy rain and we had not yet checked it out.

"I'll go.  I need to go outside," Meredith said.  I asked the others and no one wanted to join us.  Meredith and I gathered our rain gear as large puddles formed on the deck.  After a short drive, we found the Windham Path trailhead. Even fully covered, zipped, and snapped up in torrential rain, we could not miss the beauty of this trail.

Rounding the final bend, I heard my phone deep in my rain jacket pocket.  Thomas said, "We're going to go out for ice cream.  Want to meet us?"  Apparently, cabin fever had set in at the house, even though it was only mid-morning.  At the Catskill Mountain Country Store, other patrons consumed full breakfasts, but that was not our plan.  Breakfast for us had been hours before.  We were ready for a serious snack.

Attached to the store, hay bales under a roof with enclosed plastic sheeting looked inviting.  Bales rose high above the children but not so high that we might lose them in the maze. Running between the bales, admiring the Halloween decor, and petting a very friendly cat helped the children expend some energy before heading back to the house.


The rain still pounded as Thomas and Marlie prepared a pizza lunch.  By 2:30, we decided that we should pack up and head home.  Thomas and family left first in their car, beeping to us as they drove out of the driveway.  Bill and I took Meredith to the bus stop on Main Street for her 4:00 Trailways bus, and then we drove north to Albany.

Three full days with two nights, not far from home, had made for a great family weekend.  I was very pleased and said to Bill, "I bet you never thought you would vacation in Windham, did you."  "Never," he said with a smile. 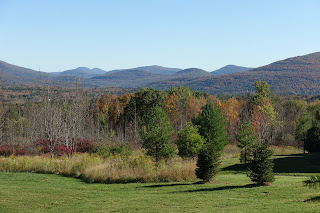 Posted by Virginia at 8:59 PM No comments: