I had been watching the little maple tree across the street, waiting for its leaves to turn yellow.  The tree appeared healthy and would be fine when Hong returned, if she returned.

"I shut everything off in my apartment this time. I never do that," she had said, "I might not come back." She planned to spend three months in China visiting her 98 year-old mother, and return before Christmas. 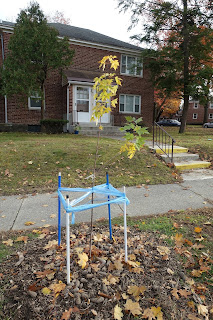 This past Spring, Hong walked across the street to speak to me when I was in the my yard.  "I was so rude to you," she said.

"What do you mean?" I was confused.

"When I came over and wanted to cut down your flowers."

Some of you may remember one of my earlier blog posts, in which I included Hong's appearance at my front door brandishing her clippers. She claimed that she was allergic to my flowers and could help me out by cutting them down. (http://nooksandvales.blogspot.com/2010/07/dankers-global-village.html)

Now her confession about the flowers made sense to me. I asked her about her diagnosis. She rubbed her abdomen, and added, "it's everywhere."


A few weeks later, she again came striding across the street from her apartment.  This time she said, "I want to plant trees.  You can help me, because your trees are very healthy.  I have watched them grow."

In the last ten years, I had planted two trees in our front yard, a flowering crabapple and a linden tree. They had done well.

"Trees will be my children.  I will plant lots of trees.  They will be here a long time after I die."

"Where will you plant them?" I asked.

"But that's city property. You have to get a city tree."

"I won't pay money to the city for my tree. It will be free.  I have permission to plant one."  Hong had certainly done her homework.

In a couple of days, a pick-up truck arrived carrying a small spruce tree. "My friends gave it to me," she said. As soon as they left, Hong began to dig a hole with a shovel.  Hours passed and she was still digging. At 70, she appeared too strong to be dying.  I went to bed.  In the morning, the tree stood in a circle of new earth, green and healthy. 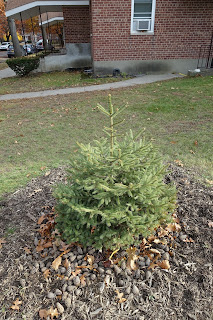 When I saw Hong later that day, working in the earth, she said, "It's too deep."  In fact, it was planted a little low in the ground.

By evening, she had pulled the tree out of the hole she had spent hours digging the night before. The forlorn little spruce lay upside down on the grass, with its roots in the air.  It remained there the following day, and the next, and would surely die from this exposure, I thought.  But the third evening, Hong was back, digging late into the darkness. In the morning, the tree stood upright and even with the ground.


I didn't see Hong for another couple of days.  When I did, she said, "I had to stop digging the first night.  That's why I left the tree. I was so tired."

"I bet you were!  You were digging for hours."

"Midnight, and then I had to stop.  The manager of the apartments was angry with me. I tried to explain, but he has trouble with my 'Chinglish,' so I just said, 'my cancer hurts,' and I rubbed my belly. That scared him."  She laughed, thinking how she had found a way to end the conversation. "Tell me what I should do now. You know about trees."

"You are the expert.  What did you do to make your trees grow?"

"Not much, really. I just watered them."

"Oh! Water,"  she said.  The next day she reported her newest research on the computer. "I learned about my tree, and you were right. You said I should water.  How much water?  Every day?  What did you do? I don't know anything about plants."

That appeared to be true.  Hong had retired from a career in molecular biology research at UAlbany.  Her life experience had not taught her about trees.

I realized that she wanted specifics.  "Two buckets of water every other day," I told her. She repeated what I had said.

One day, a little maple tree appeared between the sidewalk and the street.  It was thin and spindly, with no more than twenty leaves. Besides digging another big hole for this second tree, Hong had added a layer of pine cones as mulch.

She came running across the street. "There are little bits of new green on the evergreen tree!  You told me, 'just water.'  And I did. Other places that I go, I see trees now that are dying. People don't know, or they are lazy.  They have not done what you said.  They should have watered their trees."  She pointed to a couple of young cedars alongside a neighbor's house.  "See? Now I know. They did not water their trees, and look, the leaves are all brown. You know about trees." Sometimes I, too, had trouble with her Chinglish, especially when she was excited, but I could tell that she was happy.

And the new maple?  "Oh, very fragile, but I give it two buckets of water every two days, just like you told me."

In past years, when I had watered my new trees, I carried two 5-gallon buckets from the faucet on the front of the house to the trees, only 10 or 20 feet away.  Hong was carrying smaller buckets, perhaps 3-gallons each. She filled them in her upstairs apartment, brought them down the stairs, and lugged them to the maple about thirty feet from her door and to the spruce tree perhaps eighty feet away.  Watering her trees was a lot of hard work. 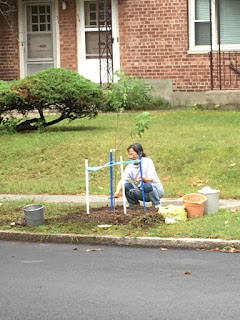 A Middle Eastern family had moved into the complex with a few children, who befriended other children.  I had seen them from my house and been impressed by how well all the siblings and friends played together, but they had not charmed Hong.

A second time Hong reprimanded the children, and she reported their behavior to the apartment-complex manager. I said, "You might want to be careful. Kids can be mean.  They might decide to hurt the tree just to make you mad."  I didn't know what Hong's childhood in China had been like, but I knew that even nice kids can act out of spite.

"Oh," she said. "I won't say anything more.  You are very wise."  She made the circle of dirt around the spruce tree wider, and put posts and plastic string around the maple.  It would be harder to run down the trees with this added buffer. She also told me, "I decided to take a picture of my trees.  The mother saw me with my camera and thought I was taking pictures of her children. I think that scared her.  Now the kids don't come around, because the mother didn't want their picture taken." 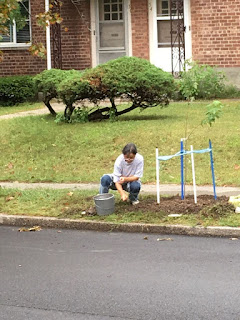 I could imagine that the mother was afraid. Over the 33 years that Bill and I have lived across from the apartments, we have seen various waves of immigrants. Most notable were the Russian families, whose children became friends with our children.  I didn't know what this Middle Eastern family's experience had been, but I could imagine events that might have forced them to leave their homeland and made them fearful.

The truce over the trees didn't last long. One early morning, I was leaving the house, when Hong came over with tears in her eyes, holding a pie pan full of greens.  "Look!  Look!"  I saw the fresh twigs of new growth.  "They broke the ends off the branches," she cried.

"That's good," I said. "It was good that someone else told the manager about the children, instead of you. The people here care about your trees."

I didn't see Hong for weeks. One warm summer evening, I sat on my front steps looking for fireflies around 10 p.m., when she came out of her apartment, buckets in hand.  I watched for a few moments and then I went across the street to talk to her. "I come out with buckets at night, every two days, like you told me," she said.  From then on, I often looked out the front door before I went to bed, and there she was, hauling buckets.

It was easy to praise her efforts, because her trees were thriving despite the hot dry weather. "If I live long enough, I will plant trees along this whole street," she said. "They will be my big family of children."

As summer passed into fall, I knew that Hong planned an extended visit to her mother in China. I agreed to continue watering her trees in her absence, although I felt the weight of this responsibility.

When she came out of her apartment one September day, her words of excitement couldn't come fast enough. "I found a BIG man to water the trees. He is more than two times as big as you. He said he will water the trees when I go see my mama."  A big man was a great idea, but I wondered if he would be reliable.  Hong continued, "I make you supervisor!  You make sure he does a good job."  I didn't relish this role.

A few days after Hong left for China, I checked the earth beneath the trees.  It seemed pretty dry, and I hadn't seen anyone tending them.  I carried a couple of buckets of water to each tree.

At the end of the week, I checked again.  Hmm, kind of dry.  I brought the first bucket over to the maple tree, when a large Middle Eastern man came out of the door of an apartment next to Hong's.  He said, with a heavy accent, "Are you taking care of the trees?"

"Oh!" I said in surprise. "Are you the man who is watering them?"  He nodded yes, and I explained that, since I hadn't seen him, I hadn't been sure, but that I was very grateful, and that the trees looked very good, and, finally, that I would be glad to leave the job to him.  Whew, so much for my supervisory duties.

In the two months since, I have never seen the big man water the trees. Maybe he goes out at midnight like Hong did.  I did, however, notice which car he drove, and, one day, when I knew he was gone, I checked the earth underneath the trees, and it was damp.  I have not checked since. Now, in late November, the trees are settling in for the winter.

And in a few weeks, Hong should return.  Her trees are waiting. 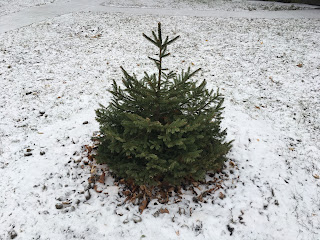