I sat at my parents' kitchen table in their Saratoga home one morning enjoying a piece of Entenmann's crumb coffee cake.  Long ago, after years of trying any crumb cake that came on the market, my mother had declared Entenmann's closest to her memory of the fabled cake she had had in her 1920s and 30s Hackensack, New Jersey, childhood.

On this particular morning, I asked my mother, "Do you remember the name of the bakery that made the crumb cake in Hackensack?" Without hesitation, she replied, "Weimer's Bakery. My grandfather went there every Sunday and bought a crumb cake for us girls and my father, and a pecan ring for Mother and himself.  We liked the crumb cake best." 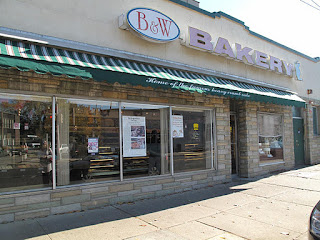 My mother's tales of the Jersey cake's delectable sweet topping and base had reached mythic status in our family.  In the 1960s, my mother had attempted to recreate the recipe herself, combining different measurements of sugar, butter, and flour, until she was reasonably satisfied that she had come close to her recollection.  Back then, taste-testing these experiments was a task my sister and I had been more than willing to take on.

When I got home, I googled Weimer's Bakery.  It popped right up under the name Boehringer and Weimer (Boehringer was added in 1946) as the home of the best crumb cake in New Jersey! Still using the age-old recipe, B and W remains a thriving institution on Main Street in Hackensack.

In early November, I visited Thomas and Marlie in Jersey City.  For the day's activity, Thomas suggested, "We should go check out that bakery."  He and Marlie had made a hobby of going to famous bakeries in Manhattan and New Jersey, so this was right up their alley, and throwing in a bit of family history made it all the more intriguing.

Meredith arrived from Manhattan, and, by noon, Thomas drove Marlie, Meredith, and me on a pilgrimage to B and W, Home of the Famous Heavy Crumb Cake in Hackensack, New Jersey. 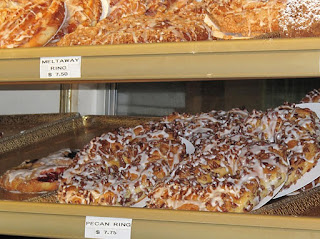 With his BlackBerry as a guide, Thomas had little difficulty locating the bakery and its small parking lot.  Inside, a cluster of customers gathered and we studied the shelves.  Pecan rings overlapped in rows, but we saw no crumb cake.  We were waiting only a few minutes when a server brought out a huge pan of thick crumb cake and laid it on a counter.  She divided it into six-portion sections.  The crumb cake vanished so quickly that it didn't have time to linger on a shelf. Baked fresh all day from early morning until 5 p.m., B and W ensures that every customer gets a fresh piece at the reasonable price of $6.95 a section.  I purchased two--one for us to have that day, and one for me to take home. 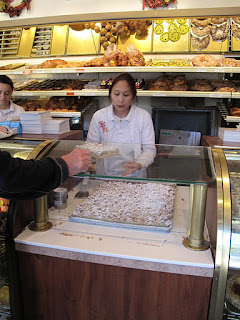 Having secured our cakes, I called my mother from the car.  She was as excited as I was that we were discovering landmarks from 80 years before. Across from the bakery, a street sign read "Poplar Avenue."  A few blocks later, we parked in front of her childhood home.  "It's right up from the bakery!" I exclaimed on the phone.  "Oh yes," my mother said. 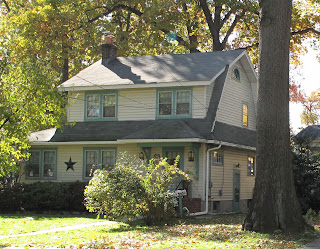 In this middle-class neighborhood, my grandfather had made his two daughters fantastic Christmas gifts that later became prototypes for the many wooden toys he created for FAO Schwarz from 1936 until 1970. My grandmother had cooked simple American foods, like meat loaf, baked beans, baked apples, and wholesome daily breakfasts of oatmeal or cream of wheat. My mother and her sister, in play dresses my grandmother had made, laced their brown buckle shoes into roller skates and skated on the sidewalk, laughing with friends after school.  And here, my great-grandfather brought waiting children a sugary treat every Sunday. 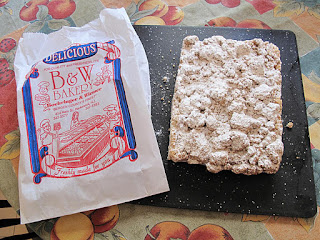 Back in Jersey City, at Thomas and Marlie's apartment, I laid our crumb cake on a cutting board. Three-quarters of an inch of sugary crumbs topped about a half-inch of cake.  I cut the cake into pieces for each of us.  Marlie made tea and we settled in for the taste test. 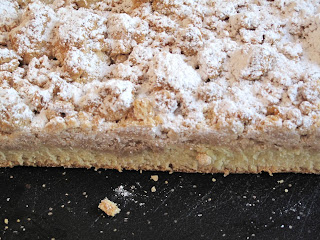 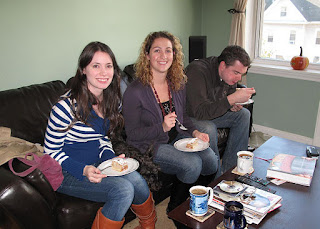 Meredith, Marlie, and Thomas are astute judges of baked goods; they know good goodies when they taste them.  I waited for their response.  Thomas said, in a less-than-enthusiastic tone, "It's good."  Meredith agreed.  Marlie studied the cake.  "It's not really cake," she determined.  "It has a rich yeast-bread base."
I looked closely.  No wonder my mother had had difficulty recreating this.  Jersey crumb cake was no ordinary combination of flour and baking powder! I pulled a piece of the base from the topping.  It was rich, moist, and sweet.  In contrast, the topping was a drier and chunky mix of brown sugar and butter. We decided that, while we liked the cake, it probably wouldn't be our first choice of breakfast treat given all the options at our disposal nowadays, both as bakers ourselves and from myriad nearby bakeries.

I packaged up the other cake and carried it back to Albany.  It was still only hours old when Bill had a piece around 9:30 p.m.  "This is really good!" he exclaimed.  I told him of our earlier somewhat subdued response and he repeated, "It seems pretty good to me."  Still, I knew the real judge was in Saratoga.  I froze a large section (against the recommendation of the bakery, of course) until I could take it to my parents.
In the meantime, I called my mother and we talked about Hackensack.  I found 1930 and present-day population statistics online and information on architectural and historical details.  I also found a recipe for a yeast-based New Jersey crumb cake! My mother reminisced about school, her friends, days when her father worked in New Jersey but her grandfather commuted by train to New York where he owned a men's millinery shop, and when Hackensack was a rising suburb separated by woods from the next town.

The following week, I was again at my parents' kitchen table. I hadn't told my mother that I had brought a crumb cake from Boehringer and Weimer's.  My mother's eyes opened wide when I took it out of the bag. "I can't believe you carried this all the way from New Jersey!" she exclaimed. My father was equally impressed.

When she saw the proportion of sugary topping to cake, my mother said, "No wonder we girls loved this!"  I waited for the verdict and she did not disappoint, "Boy, that's good!"  The rich yeast-cake base and the thick layer of crumbs were sources of admiration and brought up memories of a time when bakery treats like this were just that, treats. I showed my parents the photographs I had taken, and I was thrilled that the whole experience had been a fun vicarious journey for my mother. 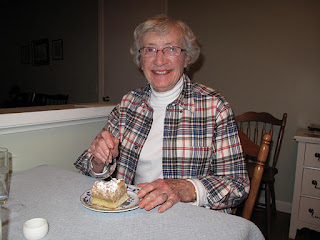 When I visited my parents' home on Thanksgiving, I was surprised to hear my mother tell Bill that she and my father hadn't liked the crumb cake.  "What?!" I exclaimed. "You said it was really good!"   "Well, yes, but we decided that it was an awful lot of sugar, more sugar than cake, actually."  Ahh, I knew what had happened--my mother's adult perspective had kicked in. The day I had brought that New Jersey crumb cake straight from Hackensack, her gleeful response had been that of her 1930's inner child.
Posted by Virginia at 8:02 PM 7 comments: