Our bus drove along gorgeous scenic roads. Fields of lupine grew up the mountainsides.

Eventually, we came to our first waterfall of the day, Gullfoss. The saving of Gullfoss represents early conservationism in 1907, when a fourteen year-old girl, Sigridur Tomasdottir raised public awareness by walking all the way to Reykjavik to protest plans for a power plant which would destroy the falls. 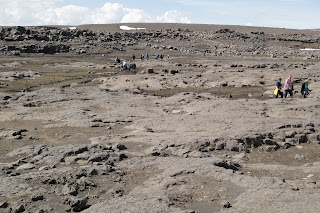 We walked from a lava field on a narrow path down to the falls, where a continual spray of water made lush vibrant green plants grow on the rocks. What a contrast from the landscape above! 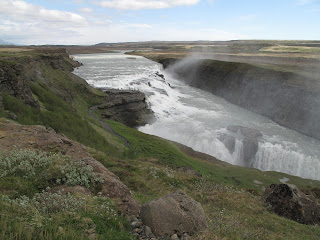 The falls were huge and powerful, pounding through a canyon and tumbling over a wide rock face. I could understand its appeal for water power, but was glad that it had been saved. 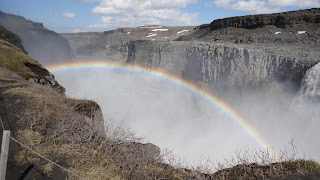 Walking up to a higher level, we were rewarded with an expanded view, and a brilliant rainbow, as the sun came out from behind clouds. A fabulous introduction to Iceland's waterfalls.
-----------------------------------
We drove for miles through the lava field, and then stopped at a place where we could walk on it. People's feet had squashed the lichen that grows on the lava, and made a surprisingly soft mulch-like surface to walk on. Many of us studied the lichen and tiny flowers that grew over the lava. 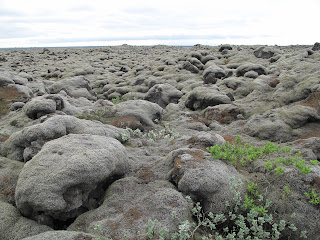 This field was created in 1783, when the volcano exploded, continuing daily for six months, and nearly destroyed the nation. Fifty percent of the livestock was killed. Many people died from famine. This was the biggest lava flow from a single eruption in world history. 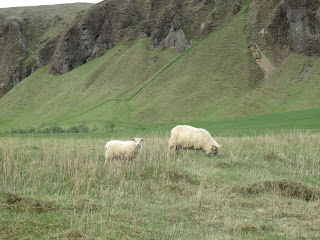 I saw a few people, as I progressed to a rock area that was the top of a cluster of basalt columns. A bird, which we later identified as an oyster catcher, hopped in the grasses. 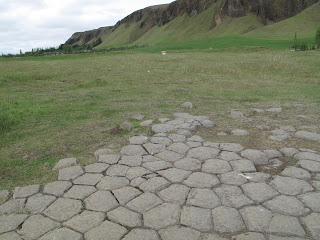 Later, I again slipped off on a trail by an auto stop. This path went up high through a lupine field with views of a glacier. The view from this hill was exceptional, as was the silence. All I could hear were the bees buzzing on the lupine and a few birds. 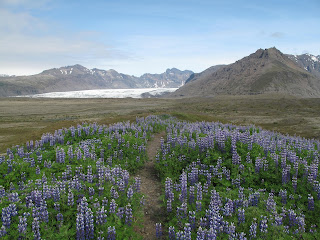 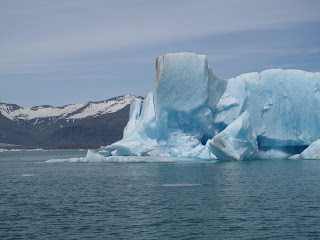 The icebergs were a deep blue, and we could see that they extended farther under the water than above. A seal rested on one. The boat guide pulled up a piece of ice and had people see how heavy it was. Then he cut pieces off, put them on a tray, and we each had a bite to eat. 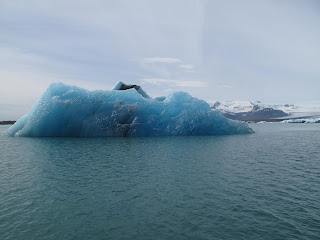 He said, “you are eating 1000 year old ice.” All of the icebergs float under the bridge here and then into the ocean. The glacier is creeping back, and may only have icebergs floating from it for another 30 years.

We drove to a different fjord to the town of Siglufjordur. A thriving, decades-long herring business used to support this town which had a population of 30,000. In 1969, the herring died, and the business ended. While many reasons have been given for this, the death of the herring is considered an act of nature. The town's population dropped to 1300. 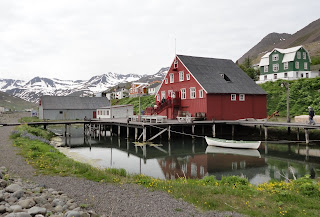 Siglufjordur is totally charming and part of the expanding tourism economy. 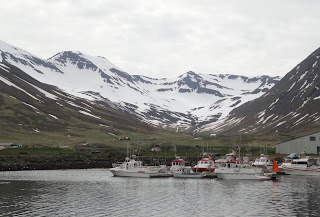 Bill and I walked around. Then he explored the grocery store, while I went up through the cemetery looking for a mountain path. Lupines lined a dirt road that continued up. 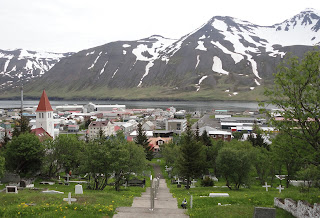 I went until I could see wide views in all directions, one beyond the harbor to the end of the fjord and snow-capped mountains, another out to sea, and below to the village and harbor. 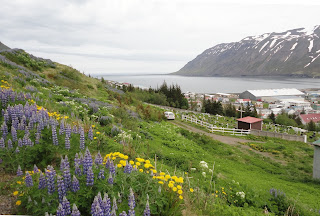 As often happens, Bill and I found each other easily upon my return. Bill showed me a little hotel he had seen, which had traditional one-speed bikes on its bike rack. We could imagine vacationing here.

Two other couples joined us at the harbor cafe for lunch. Bill and I both had fish and chips made with cod. It was excellent, as we have found the food to be. Paprika is a popular spice here, and was sprinkled on the chips.

-------------------------------------
Everyone looked forward to our visit to a horse farm. We began with a delicious farm lunch in a sun room overlooking the meadow. The weather had cleared, so we could sit outdoors to watch a demonstration of the five gaits that are natural to the Icelandic horse. 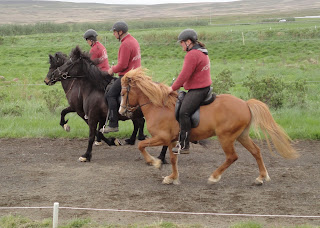 Three riders rode the horses around a large track. Amidst rolling hills and low shrub growth, the riders and horses made an idyllic scene. 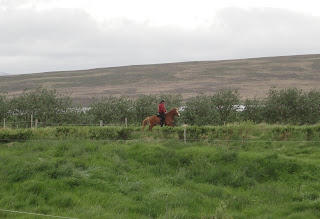 We could clearly see the difference in each of the gaits. One of the riders carried a glass of beer around the track to demonstrate the smoothness of the horse's fifth gait. Only the foam blew off the top of the beer glass.

The owner took us inside the stables, where we could pet and admire the horses. Besides their long manes and tails, they also have very long bangs, at times covering their eyes. 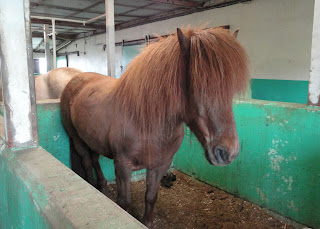 Some others have blue eyes, another unique feature of this breed. Everyone felt that this visit was a very special experience that the average tourist would not have. 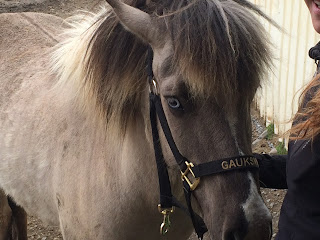 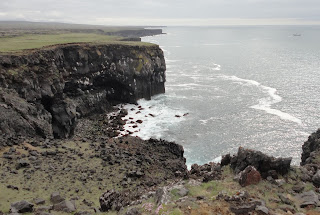 I was entranced by the Icelandic sweaters, in all varieties of design, but mostly made in traditional natural colors of grays and browns, or in blue. Sweaters were about $130, less than I can make one for.

They generally did not have buttons, but had zippers on the cardigans. I spend quite a bit on metal Nordic designed buttons, but, still, these sweaters were reasonable. The headbands and gloves were, comparatively, not as reasonably priced.

In other stores, I found yarns to knit and wool ready for spinning. 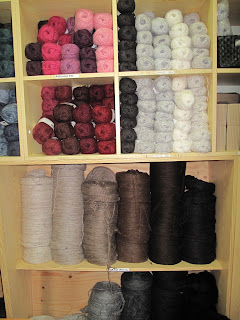 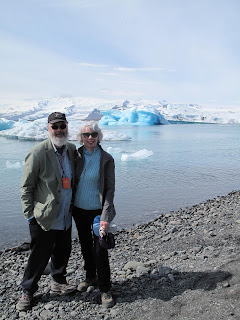