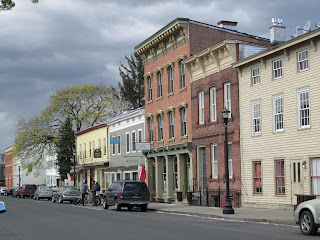 Hudson has been in the news as a great place to visit for about a decade.  I was very interested when my friend, Lynn, suggested we go there for lunch at Cafe Le Perche.  Every time we planned to go, the weather was uncooperative or a conflict arose, so I had an extra month or two to read up on the new and improved City of Hudson.  Coming from a few decades of poverty, drugs, gambling and prostitution, Hudson has re-invented itself as a New York City getaway, especially for anyone interested in antiques, art galleries, gift shops, and restaurants.

Google recommends driving down route 9 from Albany which may be a bit faster than my choice of route 9J.  On this early spring day, the 38 mile trip took me 55 minutes. I enjoyed my drive along the Hudson River with its rural and charming scenery and occasional views of the Catskills. Lynn, coming from her home in nearby Chatham, arrived a few minutes ahead of me. 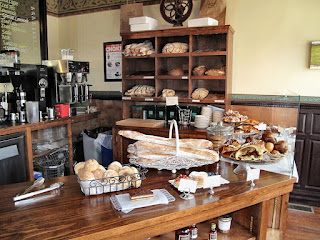 Le Perche is a bakery/cafe in the French style.  The owner studied the textures of French baking flour and now commissions local Wild Hive Farm to grow and grind bread grains to order.  In addition, the imported French bake oven, housed in  a carriage house behind the cafe, is so huge that it takes days to cool if the business closes down for a vacation.

A recent article in the Chronogram had touted the bakery's signature baguette.  When Bill heard that I was headed to Le Perche, he requested a loaf.  I also purchased half a loaf of still-warm peasant bread that Lynn recommended.

After perusing (and salivating over) the bread selection, Lynn and I chose to have lunch in the cafe area. In warmer weather, outdoor seating would also be very appealing--one of many reasons to go back!  My brie sandwich with pear cranberry chutney on walnut sourdough bread was delicious, along with a refreshing glass of lemonade flavored by crushed fresh mint that tasted like summer.

Having met while working at Honest Weight Food Co-op, Lynn and I spent a pleasant couple of hours talking about food, family, and a variety of topics we had touched upon during fleeting moments at the Co-op.

Afraid that dessert goodies might sell out, Lynn had bought a buttery chocolate croissant when she first arrived for us to share. Sure enough, that had been the last one. I definitely profited from Lynn's previous experiences here and swooned over the flaky butter pastry and creamy chocolate filling!

After lunch, we took a walk along Warren St., the central part of the revived shopping area.  Small businesses line both sides of the street for a few blocks.  Lynn suggested that we go into Liliandloo, her favorite gift shop.  We saw many unusually crafted items in the two-floor multi-roomed store.  This is a place to buy a wedding gift, if you like to give "off the registry." Items come in every price range.  I saw linen towels on a roll for $8 as well as a 10 oz. pottery pitcher with a pretty leaf handle for $115.

Parent to a young and lively golden retriever, Lynn knew her time away from home was limited.  After she left, I spent another 45 minutes wandering Warren Street.  Fifty or sixty years ago, this may have been a typical Main Street USA, before the city's decline.  Today it caters to an upscale clientele reflected in lovingly restored buildings.  I particularly liked the shop, Rural Residence, another home store with unusual items and a large table of Hudson Valley related books.
Although it would be possible to spend hours browsing, I had to head back to Albany, but decided first to drive further down Warren Street.  A block or two from the main area of stores, these two imposing homes reminded me that Hudson has a very long history. 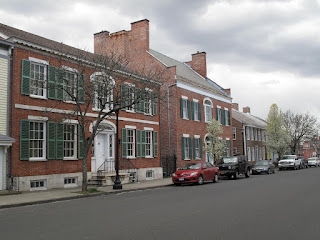 Just as I intended to seriously begin my return trip, I saw Verdigris Tea.  Tea shops are hard to resist. I parked the car again and checked it out.  All the accoutrements for the tea lover are here: tea pots, books about tea, many loose teas with samples to sniff, as well as tables for relaxing moments of drinking tea and eating a scone.

While I didn't have a puppy at home, I did have a rehearsal in Schenectady in the evening, so my time here also had limits.  I returned to 9J heading north, admiring homes and brilliant spring flowers all the way. 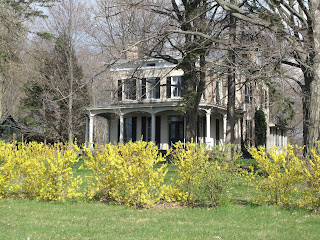 This house is not only fronted by a hedge of forsythia, but has views to the river looking both north and south.
9J has an astounding number of historic plaques.  I would never get home if I stopped to read them, but next time I would be sure to read a few. In addition, signs for nature preserves abound.  I have a great weakness for any place with a trail and I knew that most of these preserves would offer Hudson River and Catskill Mountain views.  I was particularly intrigued by a sign pointing to "Harrier Hill."  Another led to the Lewis Swyer Nature Conservancy area, a place I had heard of but never seen.  My future return trip was becoming more and more defined!.

Further north, I was taken with the town of Schodack Landing.  Passing storm clouds made for a dramatic sky behind this little Dutch Reformed Church. 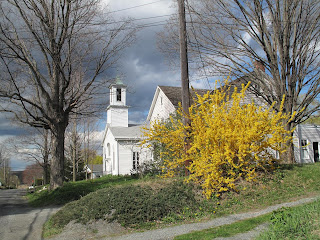 And just beyond the village of Castleton-on-Hudson, I could see the skyline of Albany.  Traffic increased as I hit 787 and I began to focus on my evening rehearsal.  Still, I retained a relaxed frame of mind from my good lunch at Cafe Le Perche visiting with Lynn, my walk along Warren Street in Hudson, and the peaceful drive through Hudson Valley countryside.
Posted by Virginia at 10:32 AM 2 comments: