What I Did Last Summer

I am torn between the words of my friend, Rachel, "You should write about your amazing year. When you see your life, there is before 2015 and there will be after 2015," and those of my mother, "Why would anyone be interested in reading about your life?"  Guess whose words are winning out?  In fact, the events of the past five months have been so consuming, that I have nothing else to talk about.  So, here's hoping you find this post to be an enjoyable read.

In mid-winter, when my son, Thomas, and his wife, Marlie, announced that they were expecting a baby in early fall, and my daughter, Meredith, and her fiance, Brian, announced that their wedding date would be in late summer, I knew this would be a stand-out year.  And these were not the only events.  Meredith and I intended to finish our 15-year quest of the 46 Adirondack High Peaks, and I had a 90th birthday party planned for my mother.  I began to make lists, and more lists, and lists to replace the lists that I lost.

The summer did have a few glitches: Bill had surgery on his right hand, that is still healing, and my father had a few health issues, both pesky and scary.  But, now in October, I look back and see a summer of friends, family, and festivities. The following is a photo journal of my spectacular past five months.
----------------------------------------------------------------
I thoroughly enjoyed the preparations for Meredith's bridal shower in mid-June.  It was just my style--simple, with a dozen close friends and family, and all food that I had prepared.  I had requested that guests give Meredith something from their own homes that they felt would be meaningful.  Many of them did, and those who did not, gave her gifts that were equally heart-felt and personal.  Every gift had a story.


The day after the shower, Meredith and I headed north to hike our forty-fifth and forty-sixth mountains.  Our transition from ladies to woodswomen was abrupt, but underscored our versatility. We felt fortunate to be able to cater to these different aspects of our personalities.

Our first peak, Sawteeth, was fun, even though we hiked in a drizzle with no views.  We were excited about our plans to hike our final peak the following day, and I had booked indoor lodging--no backpacking and camping on this final adventure!

Unfortunately, the next day dawned dry and clear, as predicted, and then turned to torrential cold rain. Hiking our 46th peak on this day did not meet our expectations. We were deflated and exhausted.  Despite my "46" sign, don't I look like a waif from a Charles Dickens' novel?  I would fit right in on an 1800s London street corner, begging passersby for a roll to eat. 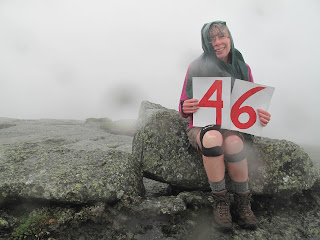 And then, who should arrive an hour after we got off the trail, all the way from Syracuse to the Adirondak Loj, but our friends, June and Roger.  They were excited for us, and began to sweep us into the mood of what we had accomplished, with gifts, a card, and their overwhelming good cheer and generous spirit.

Three days after Meredith's and my return from the Adirondacks, Bill and I headed west to the Canadian Rockies' national parks of Banff and Jasper.  If this trip had not been planned months before, I doubt that it would have happened.  And yet what a getaway--gorgeous scenery, time together in a beautiful place, and all the gifts that nature and charming towns can provide.

July was not to take a backseat to June.  My Aunt Dorothy's arrival from Toronto, to coincide with my mother's 90th birthday, began with lunch at my house.  My friend, Peggy, and I had been working on violin duets to play for my parents and aunt, on the porch.  What fun!  Music, food, and great conversation.


And then came the party.  I hosted 10 of us at the Spa Park for a "hot dog" picnic, my mother's request for her birthday dinner, and then 19 of us for cake.  The muggy weather made me fear for the "Yaddo" cake that I had created to recognize one of my mother's long-enjoyed hobbies, working in the gardens there.  But rain held off, the family came from near and far, and the cake received rave reviews, both for its decoration and for being our favorite chocolate with mocha frosting.

And what did Meredith and I do next??  We headed back to the high peaks, to rectify our previous disappointment.  We felt fit and energetic, the sun shone, the atmosphere was clear, we soaked in the iconic views, and reveled in our accomplishment.  We considered this the true completion of our 46er journey.  To top it off, Gillian Scott, a columnist for the Times Union, wrote about our adventure for the newspaper.  I am still, months later, being congratulated, thanks to the widespread press we got locally and through Facebook.


Marlie's baby shower began the month of August.  Marlie's mother, Nancy, and I had scoped out locations for the event, and chose the Olde English Pub in the Quackenbush House in downtown Albany.  Nearly forty people came and shared in the excellent brunch there, finishing with frosted rose-topped cupcakes that I made for the event.  Marlie had everything she would need for the baby.

In mid-August, Bill and I went down to OWO, One World Observatory, to see Thomas's new work place.  As Director of Finance for OWO in the new One World Trade building, Thomas gave us the VIP tour on this clear summer day.  Unbelievable views, a delicious lunch overlooking the city, and sharing part of Thomas's day at this phenomenal new New York destination, left us awe struck.


And what a finish August had!  Meredith's wedding could not have been more perfect for her and Brian.  In the dress she made, Meredith looked fabulous and glowed all day long.  Marlie made the cake, a masterpiece and an incredible gift, especially considering how far along she was in her pregnancy.  This day was filled with love, fun, music, and all that parents could wish for their daughter's wedding.


September dawned bright, but by the 3rd, Marlie was on bed rest in the hospital. Apparently, the baby wanted to join our party summer.  Hayden Sophia Traver was born just three weeks early, on September 19 and weighed 6 lbs. 12 oz.  Could 2015 get any better than this?

And now, I have just returned from a week in New Jersey, helping Marlie since Thomas has gone back to work and Marlie's mother has returned to Albany.  What a joy!  Hours passed by and all I did was hold little Hayden.  Her warm fuzzy head and her little coos and gurgles filled my days. 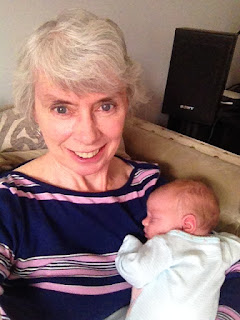 Marlie tells me that I was, in fact, a help to her.  I didn't just spend my time on the couch cuddling my first grandchild, but it was all fun having so much time with Marlie and Hayden, and snatching moments in the evenings with Thomas. 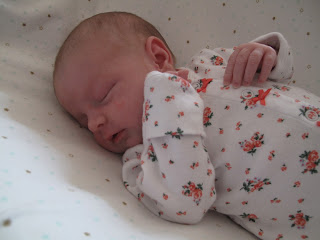 And now?  What's left for this year?  Life is the current project.  Momentous events lead to a new daily world.  Summer 2015 will always have a special place in our history.
Posted by Virginia at 10:41 PM 3 comments: