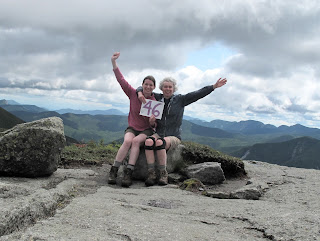 Hundreds of people become Adirondack 46ers each year, joining the ranks of thousands who
have climbed all 46 High Peaks with summits of more than 4,000 feet. The luckiest ones find
more than adventure or challenge or even natural beauty — it's the people they hike with that matter the most.

"We were definitely not excited," said Virginia, the outings chair for the Albany Chapter of the Adirondack Mountain Club.

"We'd been looking forward to it for so long," Meredith said. "And then we couldn't see
anything and it was so windy and cold and rainy."

So one bright, sunny weekend in July, Meredith hopped back on a bus and came up to Albany from her home in New York City. The women slept in Virginia's car in the parking lot at the trailhead and got an early start the next day. They hiked the same mountains they had done a few weeks earlier, this time soaking in sunshine and ample views. Then they drove back to Albany, and Meredith got on the bus again. A music therapist for Hospice home care, she was back at work the next morning. Finally, they had closure.

The hike was the culmination of a 15-year experience for the two women, one that started when Meredith was just 16. Virginia would take the kids — Meredith and her brother, Thomas — camping for a week before school started every year. And every year, she'd take them hiking. Both Thomas and Meredith were "blown away" by Cascade, their first Adirondack High Peak, but it was Meredith that decided, almost right away, that she wanted to climb them all.  "It was just gorgeous up there and you have that 360-degree view," Meredith said. "I was just immediately inspired."

Up until that point, Meredith said, "I absolutely hated every mountain we did." So it's
understandable that Virginia had some doubts about her daughter's sudden ambition. The two started out with some Adirondack classics, like Marcy and Algonquin. They took two trips a year, chipping away at the mountains, and pretty soon they were determined to finish. "As the numbers add up, you get a little bit hooked," Virginia admitted. Virginia actually started hiking High Peaks with her father when she was 14 — they did about a dozen together, climbs she would repeat for Meredith.

"I think she thought at some point maybe I would bring my fiance and maybe he and I would do a hike," Meredith said. "Or maybe I'd have some hiking friends and we would go and do them. But I was like no, this is what we do together."

Some hikes were particularly hard — like when they hiked all five peaks in the Dix Range in one day — or particularly scary — like the steep cliffs between Basin and Saddleback. A hike would end on a summit socked-in with clouds, or the trail would be deep with mud, and they'd wonder, "Is it worth it?" But the next trip out would be better, and they'd be re-inspired.

That rainy June day on the trail to Algonquin and Iroquois, Virginia and Meredith talked over their long quest, discussing what they'd like to do next, which High Peaks they'd climb again and which they wouldn't, and what the whole experience meant to them.

Virginia talked about gaining confidence in her abilities on unmarked trails. Meredith talked
about learning resilience, the ability to keep putting one foot in front of the other, no matter
how hard things get.

And both of them talked about how much the time together meant to them.

"For me, there was nothing like spending that time with her," Virginia said. "To spend that
much time in the woods with your child is an amazing experience."

From the year Meredith was 16 until she was 30, she and Virginia had those long days together, twice a summer, to camp and climb and talk and just be. They worked around Meredith's summer jobs in college, a year abroad, and her move to New York City and a new career.

Meredith said in the past few years, she and Virginia have chosen to camp or backpack to hike peaks they probably could have done as day trips. "But it really was about enjoying the woods, enjoying each other's company and making the most of it," she said. "It really became about the whole experience."

Changes are afoot for the Traver family. Meredith is getting married this month, and Thomas and his wife are expecting a child. Virginia and her husband of 36 years, Bill, are about to become first-time grandparents.

Virginia and Meredith would like to keep hiking together, at least one weekend a year, but are not planning to move onto another list. The Catskill and New Hampshire peaks will
remain unhiked. "It really was about the Adirondacks," Meredith said. "Now it will really be about doing it for pure enjoyment."