If it happens three times, it's a tradition!  My original Adirondack Mountain Club Women's Camping Overnight has become an annual event that has moved beyond the ADK and morphed into a gathering of friends with shared gifts and responsibilities.

This year there were just four of us. Although we had camped at Lake Durant State Campground in 2011 and 2012, this time I chose Putnam Pond because I wanted to paddle across the pond and hike Treadway Mountain, a mountain I had not hiked in 15 years. I sent out an email in May to nine women who had voiced interest, stating my thoughts on where we would go and what we would do. In the end, many people had schedule conflicts, inevitable in the summer or any time of year. Four of us agreed on a date and began an email exchange filled with exclamation points.

On Monday, we set up camp, went swimming, and paddled around the entire pond with its island and coves.  We took advantage of a vacant water campsite, reachable only by boat, to swim off rocks in a secluded location.  We feasted on a shared dinner in the evening, and toasted marshmallows for s'mores.

But it was hot.  When weather.com forecasted 92 degrees for Ticonderoga, the nearest town to the campground, we knew the marshmallows wouldn't be the only thing roasting.

While swimming and kayaking felt great, Treadway Mountain beckoned.  Unfortunately, Punkie had had recent knee surgery and was not ready yet for a hike. On Tuesday, she and Deb chose to spend a relaxing afternoon in the water, while Karen and I headed across the pond to the trailhead.


Not only is it fun to kayak to the trailhead, but arriving by boat makes the hike up the mountain only five miles round trip instead of eight if you walk in from a car parking area. After a nice paddle on calm morning water, Karen and I stowed our boats in the woods at the edge of the pond, and began the hike.


The humidity was already high and mosquitoes came out in force. We knew this day would be a scorcher. The trail had a classic Adirondack beginning through hemlock forest, but we took little time to admire it as we tried to outpace the bugs.

Now and then, Karen commented on the rich aroma of balsams.  And we appreciated the soft needled earth underfoot--all the better to keep moving!  So often Adirondack trails are like walking in a stream bed...sometimes, the trail literally is a streambed.


After a mile or so, the path opened into drier terrain.  We left the bugs behind as we clambered over rocks and walked on bedrock.  Over the years, rock cairns had been built at frequent intervals.  Often we would have had trouble discerning the right turns without them.  Although the change in landscape was beautiful with its  piney scent brought out by the heat and humidity and its interesting quartz rocks, we were now exposed to the sun.


A pay-off was the proliferation of blueberries.  A number of times as I hiked along, watching for direction from the rock cairns, I would lose track of Karen behind me.  One time I was concerned that perhaps she had missed a cairn and might be heading the wrong way.  When I called to her, she said, "I just stopped to pick berries.  They are so sweet."

Another time when I missed her, she had found a sheltered stream to dip her bandanna.  Then she wrapped her wet bandanna around her neck for cool momentary relief.  I wore my blu-bandoo.  A blu-bandoo is a bandanna filled with dry gel beads.  When soaked in water the beads swell up and stay cool for hours.  I dipped my bandoo in the occasional stream too. 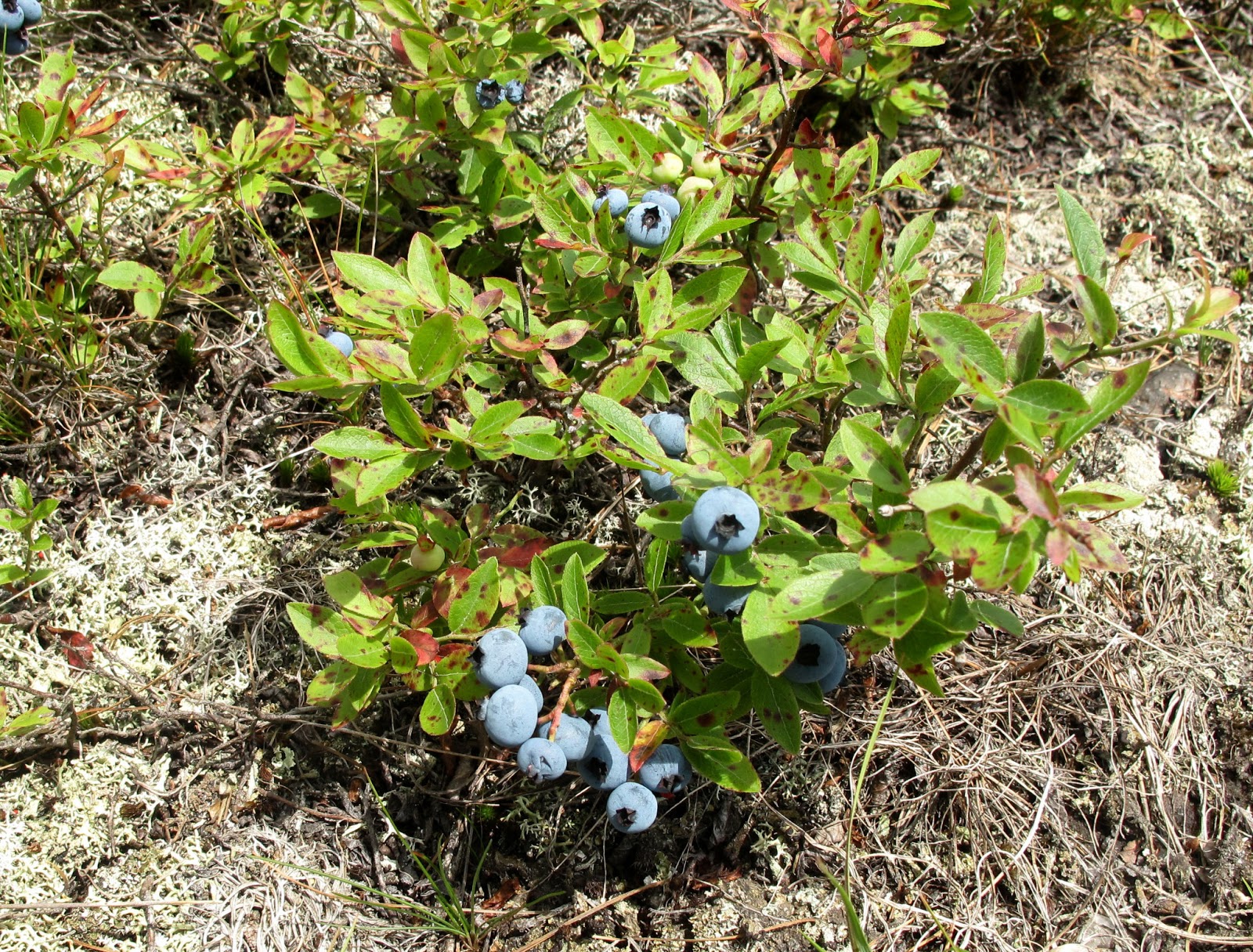 Karen and I are very compatible hikers, and have hiked together many times on ADK outings.  Stopping for delectable wild berries is one of the gifts of a mountain hike in July, and would that there were more cool streams for splashing the face with water on a hot humid day.

The last three-quarters of a mile to the summit of Treadway Mountain is along a ridgeline.  At an elevation gain of 800 feet, the entire ascent is so gradual that we could keep up a running conversation most of the time.


And then there are the summit rewards. Views of the Pharoah Lake Wilderness Area are gorgeous with Pharoah Lake front and center.  Despite the haze, we could see rows and rows of mountains in the distance.

The rocks were hot, but a large cloud gave us enough shade for our hiker's lunch.  Peanut butter never tastes so good as at the top of a mountain!

We poked through the trees to rocks on every side.  Open areas offer views in three directions.  Some of the trees had grown since I had been here with my father years ago, but they only added a more dramatic color contrast to the scene.  Karen said that a friend of hers claims Treadway as his favorite hike in the Adirondacks--a very strong affirmation for this outing.


When the sun came out again in earnest, Karen and I began our descent.  This time we rarely stopped for berries, and the bugs did not seem so bad on the lower part of the trail.  Was this because they are less vicious later in the day or were we hiking faster and really did get ahead of them?  Whatever the reason, our new goal was Putnam Pond.


We had left our bathing suits with our boats at the trailhead.  We expected to re-join Punk and Deb for a swim after our return to the other side of the pond, but, first, we planned to jump in as soon as possible.  It took only seconds for us to peel off our sweaty clothes and get into our suits.

Even better than peanut butter at the summit, is a swim at the base!  Heat and fatigue melted away as we submerged ourselves.  Up and under, over and over, we felt like dolphins.  Eventually, we climbed into our kayaks for the paddle back to the campground.

When we met up again with our friends, they described a thoroughly enjoyable wilderness day paddling to a remote campsite and swimming off the rocks with loons nearby.  Then the talk turned to next year--would we return here? what might we do differently or the same?    There was never any question that we would want to camp together again.


As we loaded our boats onto our cars, we all wished we could stay longer.  As hot as it was here, it would be hotter in Albany.  We reminded ourselves that this is what a getaway is--a moment in time, spent with wonderful people in a beautiful location.  Here's to another Women's Camping Overnight in 2014!

(Note: Pharoah as in Pharoah Lake is the Adirondack spelling of the word pharaoh.)