My mother had no doctor's appointments this week and nothing pressing on the chore list.  "I think we could do something fun," she said when I called.

She had been wishing to hike on a trail in the woods.  Having broken her hip over a year ago and now doing fairly well, we both still knew that a hiking trail might be a stretch.  A couple of days went by and then I suggested going to Merck Forest.


Merck Forest and Farmland Center in Rupert, Vermont, is a non-profit educational institution with a mission to teach and to demonstrate the benefits of innovative sustainable management of forest and farmland.  It is also a charming place to visit with lots of beautiful dirt roads and trails.


"Do you think I could walk the road from the parking lot to the farm?" she asked tentatively.  I thought she could, but it would take all of her walking stamina to go that far and back.  She would not be able to do that and still have enough endurance to enjoy the area.

I called the Visitor Center at Merck Forest and told the receptionist, "My mother used to hike at Merck Forest regularly, but now she's nearly 94 and uses a cane.  Would it be possible for me to drive her as far as the barn?"  Visitors were not allowed to drive beyond the parking lot, but I hoped there could be an exception.  "Yes, that would be okay," the woman answered.  My mother was thrilled.

My family has visited and hiked at Merck Forest since it opened to the public in the 1970s.  Even now, I regularly lead Adirondack Mountain Club hikes up Mount Antone, on the property.  My outings always include a stop at the farm to see the animals, admire the barns, and enjoy the pastoral part of Merck Forest as well.


My mother loves going to Vermont.  She admires all the scenery and comments on changes that have occurred since we last headed over through Washington County from her Saratoga Springs home.  Anything from, "oh look, didn't they do a nice job painting that house," to "oh dear, that old barn is listing badly," and even, "I don't know what possessed those people to put that unsightly addition on that pretty place!"  And there are the spring flowers, farms with rolling hills, a cafe for coffee and a mid-morning snack, a lunch plan, and ice cream on the way home.  "We'll eat our way through the day," she says.


With caring for my father until last year, my mother had not been to Merck Forest in a long time and had been fairly certain, since breaking her hip, that she would never go there again.


I stopped in the Visitor Center when we arrived and was told to park by the sugar house.  Once out of the car, my mother was determined to walk the Old Town Road past a farm field to where the forest begins.  She only stopped once to rest on the gradual uphill.  We admired the view west to the southern Adirondacks and then continued on.

Sometimes she held onto my arm going over the stony sections, but most of the time the tracks made by farm vehicles were flat enough for her to feel stable on her own. "I want to go into the woods," she said, continuing to where the forest meets the farm.  We soaked up the damp earthy aromas and admired the lush green of the woods.

Walking back along the road to the farm, we passed a field of sheep and lambs.  At first, we couldn't see the lambs because the tall grass made them invisible, but we could hear their urgent bleats.  Their mothers called to them in response.  Little black lambs bounded over the grass, joining their mothers.  We stood a long time, listening, and watching for the lambs to reappear.


After a picnic lunch, my mother was ready to explore the barns.  Her artist's eye is drawn to barns.  Sometimes her pastel paintings deviate from farm scenes to the ocean or woods and lakes, but farm scenes are her favorite.

She was taken with the chicken shed and the road leading to it.  I was not impressed with this as a subject for a picture.  Regardless, she instructed me to move this way or that to photograph the shed from a variety of angles.


After we had studied all of the outbuildings, I asked, "do you want to walk a little way on the Stone Lot Road?"   "Sure," she said.  She is highly motivated and game for anything when she is determined.  We headed up this less traveled, farm road.

In the distance, far from the barns, we could see Merck's two large work horses. Standing head to hip, their long thick brown tails switched one another's chestnut back.


We discussed whether we should make a circle back down to the barns and the car, or return on the road we had just walked.  Not wanting to miss a thing, my mother chose the loop.  She turned to me in surprise, and said, "And nothing hurts!"  What a tonic this outing was for her.

Every few feet, she stopped to study the view. She is understandably very fussy about the subjects of her pictures.  I take a lot of photographs whenever I see something that may appeal to her and then print them, but the size of her reject pile is very large.  I always tell her that she can crop the photos or change the road, or put in different fences or mountains.  However, once a picture has been rejected, it rarely resurfaces.


We came around the side of the field. Walking with an artist is a wonderful way to observe.  At each turn of the road, the view changed just enough that I had to go in the garden to get the right angle for a photo, or over there by the tree, or just to the edge of the road, or allow her to step aside when she instructed me to "stand right here where I am."   I think the picture below has possibilities for a painting, but what do I know?

On the drive home after our adventure, we admired the same houses and scenery we had seen in the morning, now from the opposite direction.  And we remembered.  We reminisced about past times at Merck Forest and thought about other drives through this rolling rural countryside.  But hunger set in again and we knew just where to fortify ourselves.  The Ice Cream Man in Greenwich serves generous portions of delicious homemade ice cream.  "Today was an upper," my mother said.

Here are a few of my mother's pastel paintings that you might enjoy seeing. 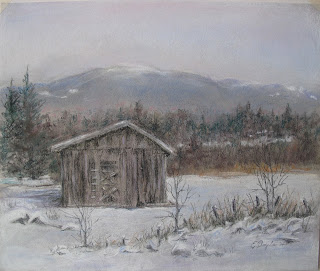 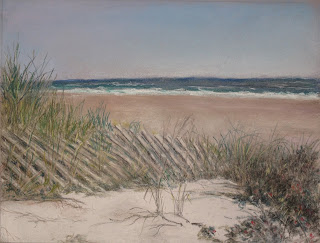 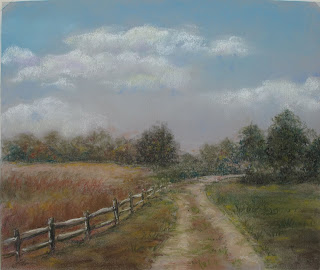