I had received emails from numerous environmental organizations about the upcoming February 17 Climate Rally in Washington D.C.  Billed as the biggest event of its kind, the rally was co-sponsored by the Sierra Club and 350.org, along with 160 smaller participating entities.  I bought my ticket and boarded one of three buses leaving from Albany at 12:30 a.m. on Sunday, the 17th.


The bus let us off near the Mall at 8:20 a.m. to frigid temperatures and a strong wind.  Many people found the nearest Starbucks on their iPhones and headed in that direction.  My friend, Laura, and her co-worker Kevin, and I decided to do a little sightseeing.


Facing into the wind, wrapped to our eyeballs in scarves, we headed to the newest memorials. 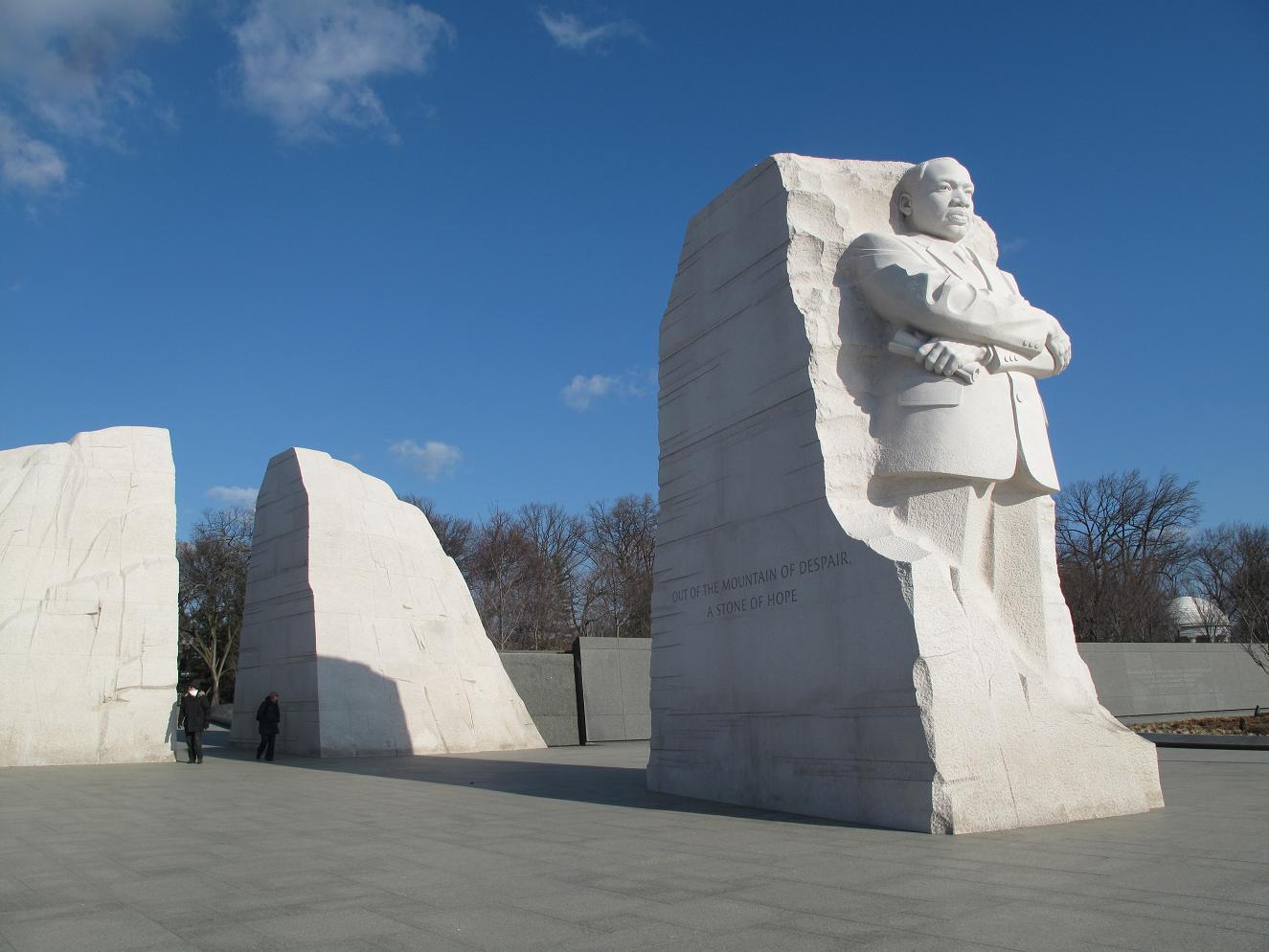 The Martin Luther King Memorial overlooks the Basin and is dramatic in carved stone with quotes from his speeches along the wall that forms a semi-circle around the statue. 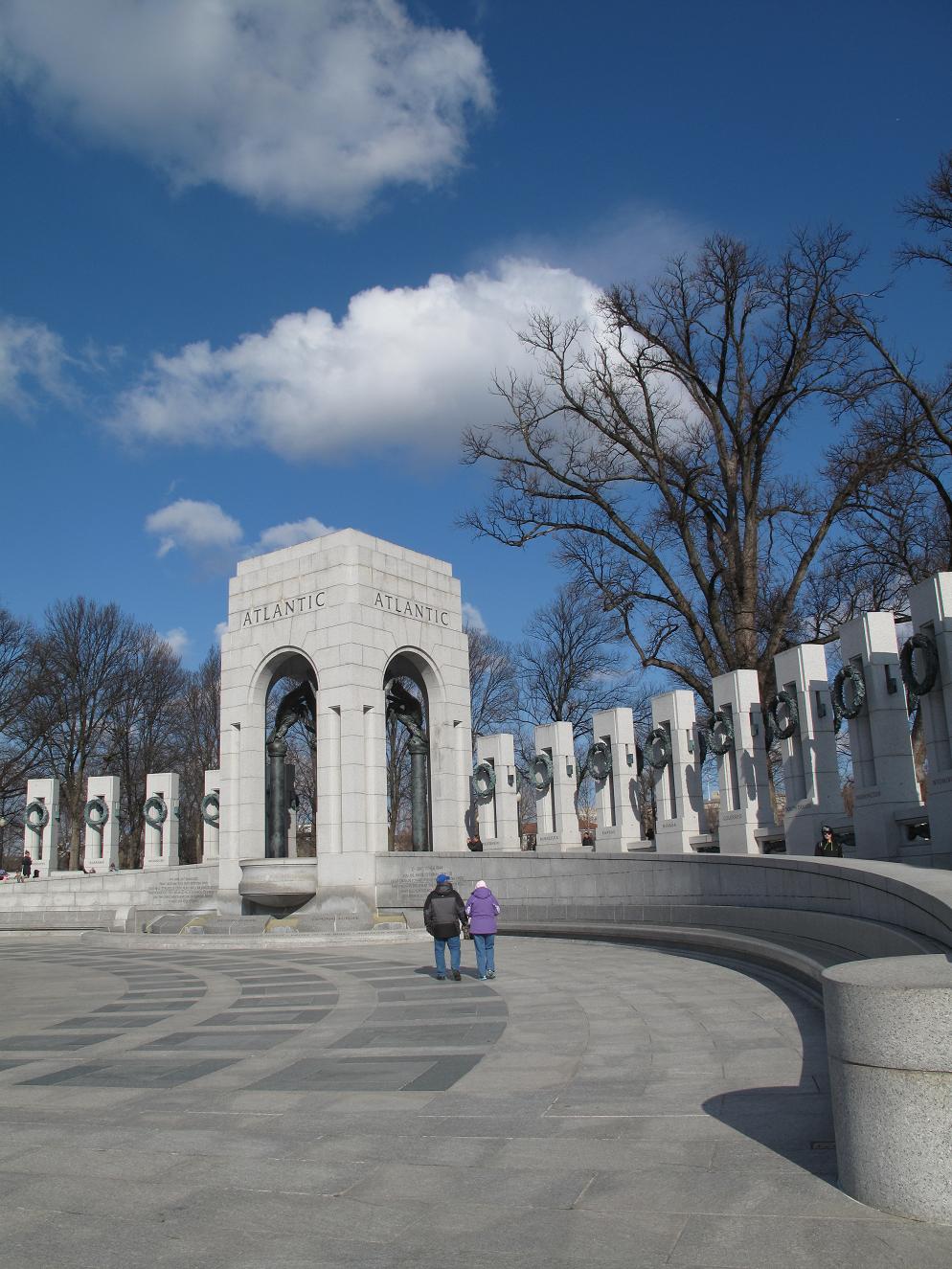 We returned to the Mall via the World War II Memorial, a dramatic series of columns with bronze wreaths. 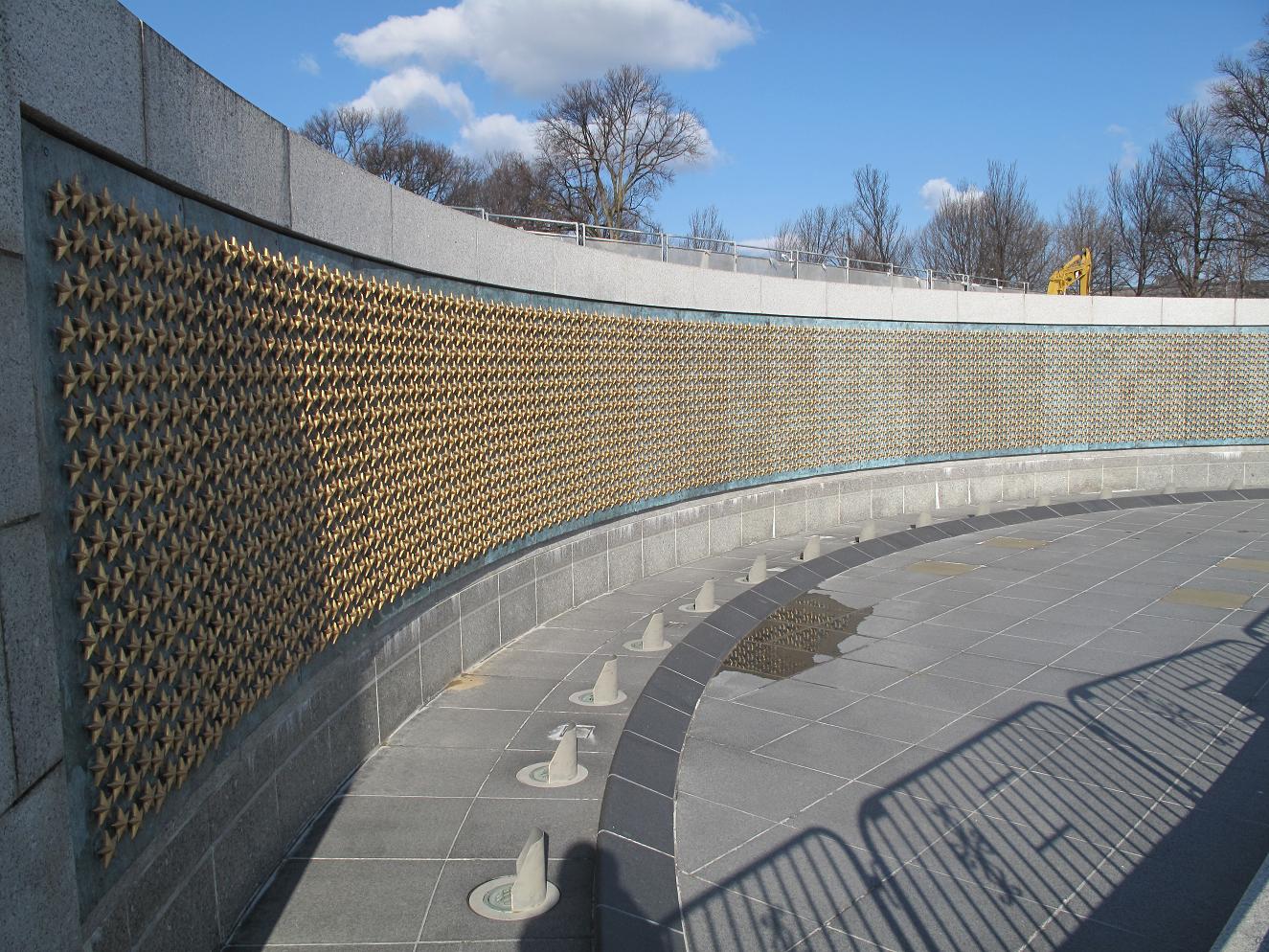 Over 4000 stars, each representing 100 soldiers who died in World War II, glitter in the early morning sun. 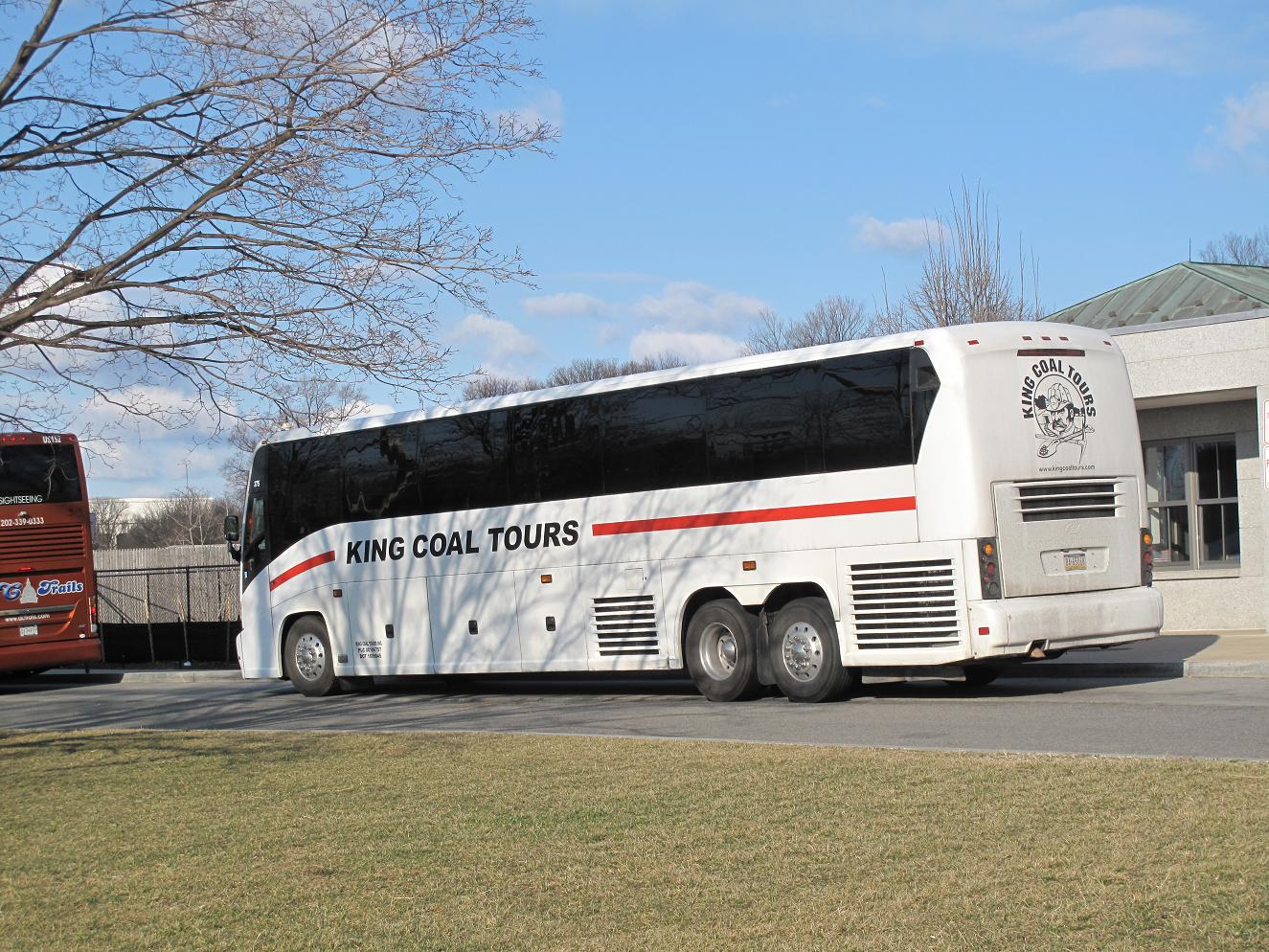 Other environmentalists began arriving from states all across the country.  We were intrigued by this King Coal bus.  It would be tough to be against climate change and ride on a bus touting the coal industry.

For a brief escape from the cold, now registering about 15 degrees with the wind chill, we made a stop in the Museum of Natural History. 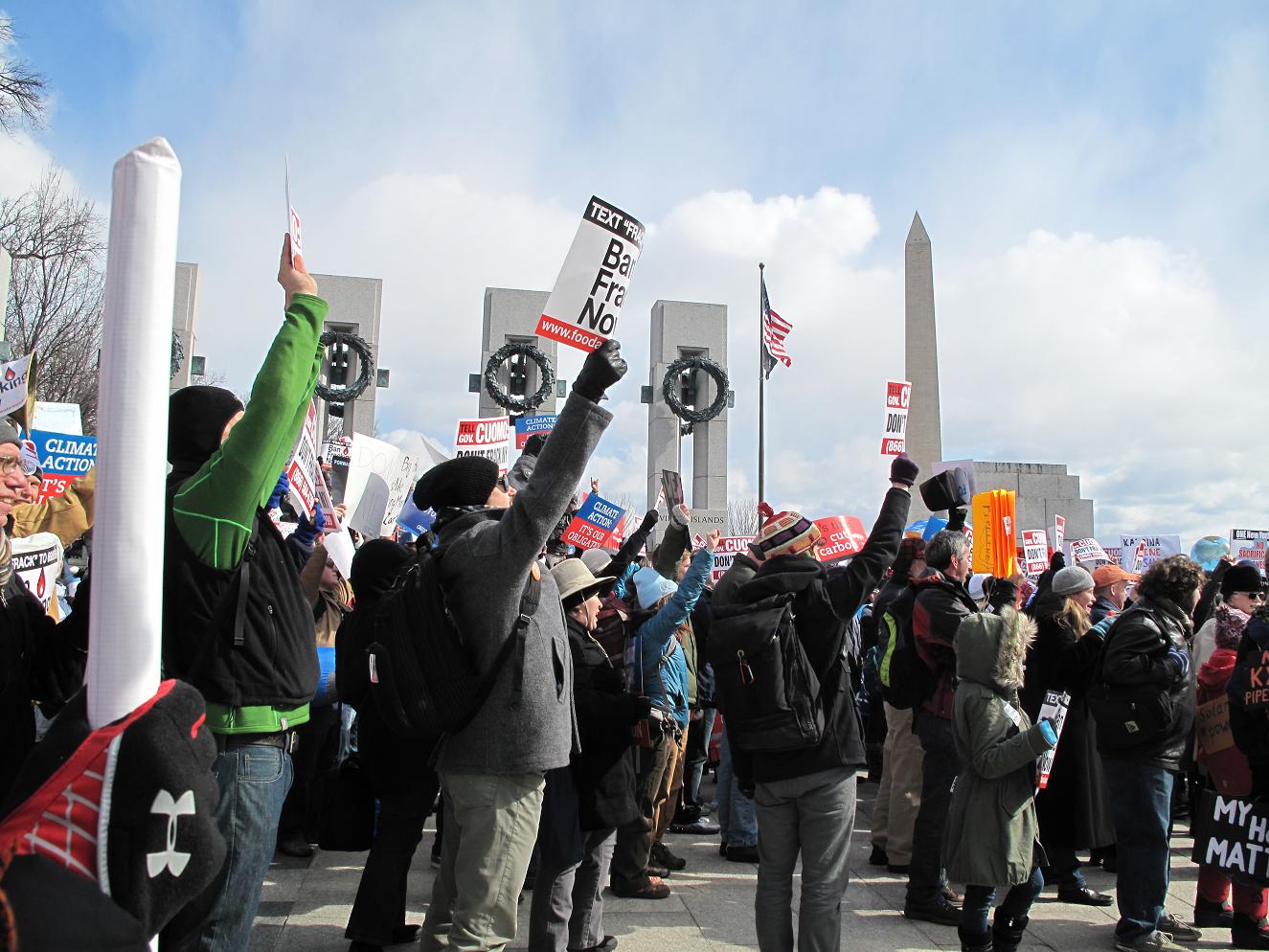 At 11:00, I left Laura and Kevin to return to the World War II Memorial where Sierra Club members and other New Yorkers were gathering for an anti-hydrofracking protest.  About 1000 people posed for a photo to be delivered to Governor Cuomo. 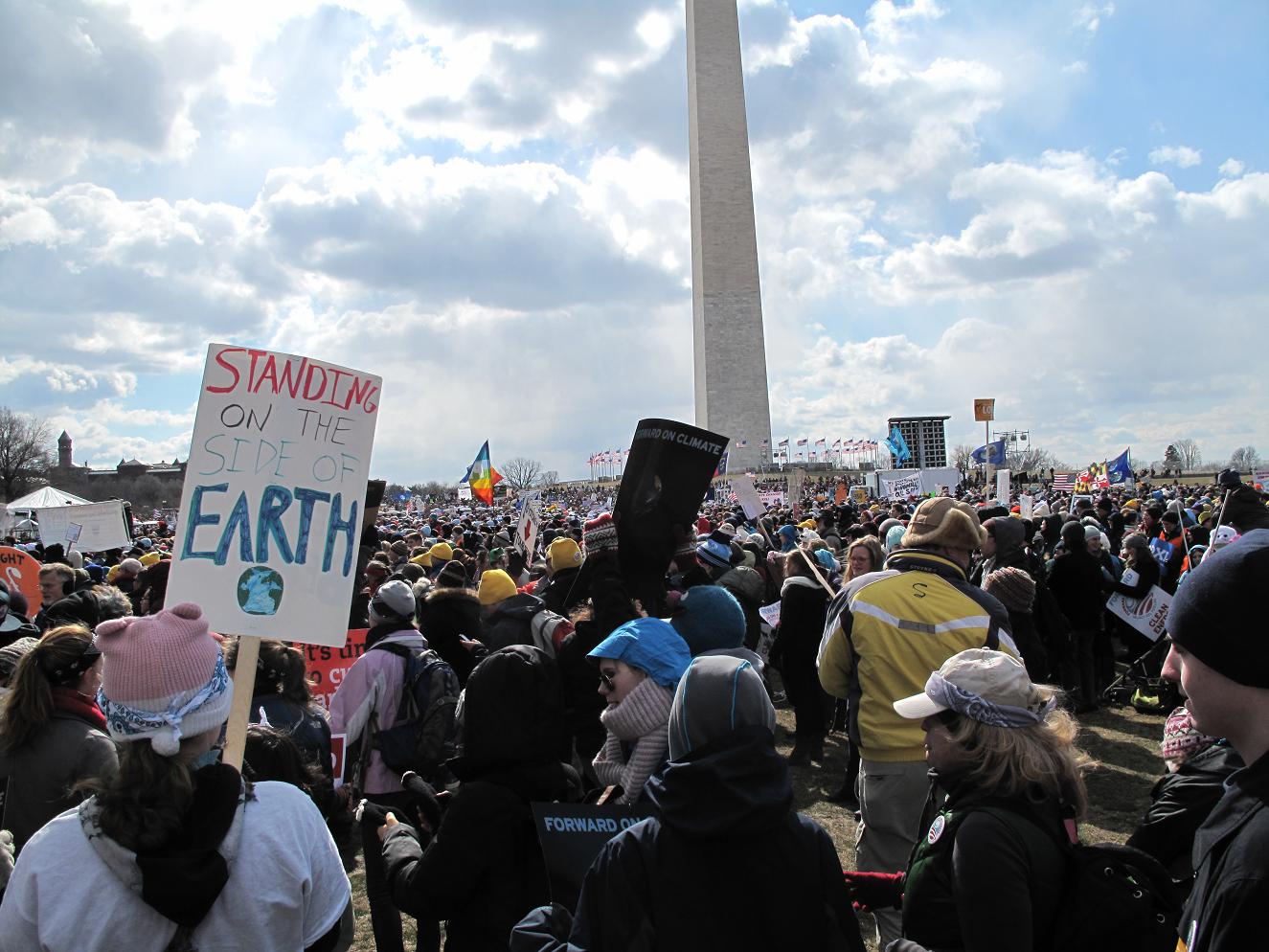 By noon, nearly 50,000 people came together near the Washington Monument to hear speeches. 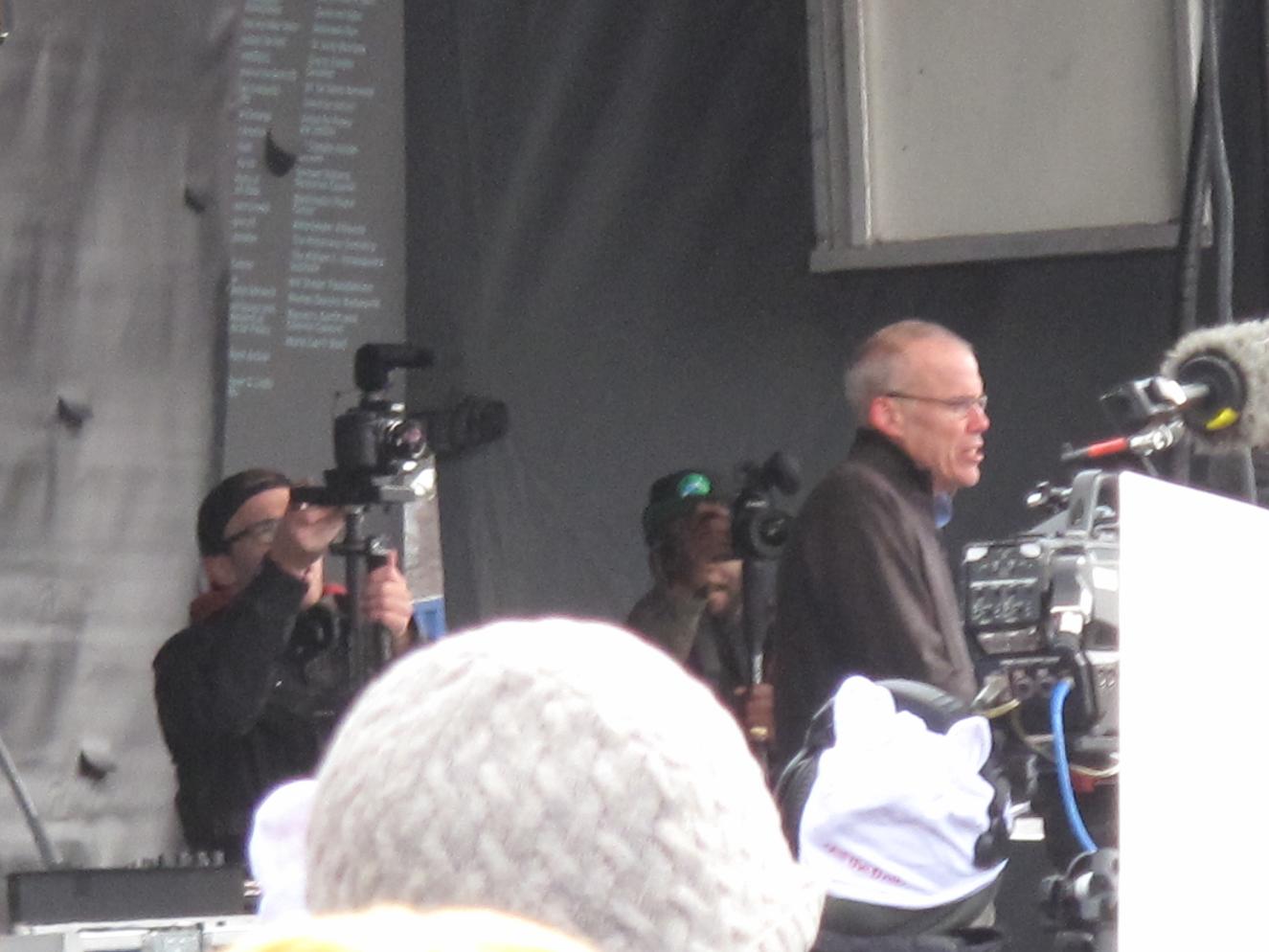 I remember seeing Bill McKibben back when he was at Adirondack booksignings as a nearly unknown writer.  Now, he has been able to bring together hundreds of thousands of people of all ages through his organization, 350.org, in attempt to change the destructive path of global warming. 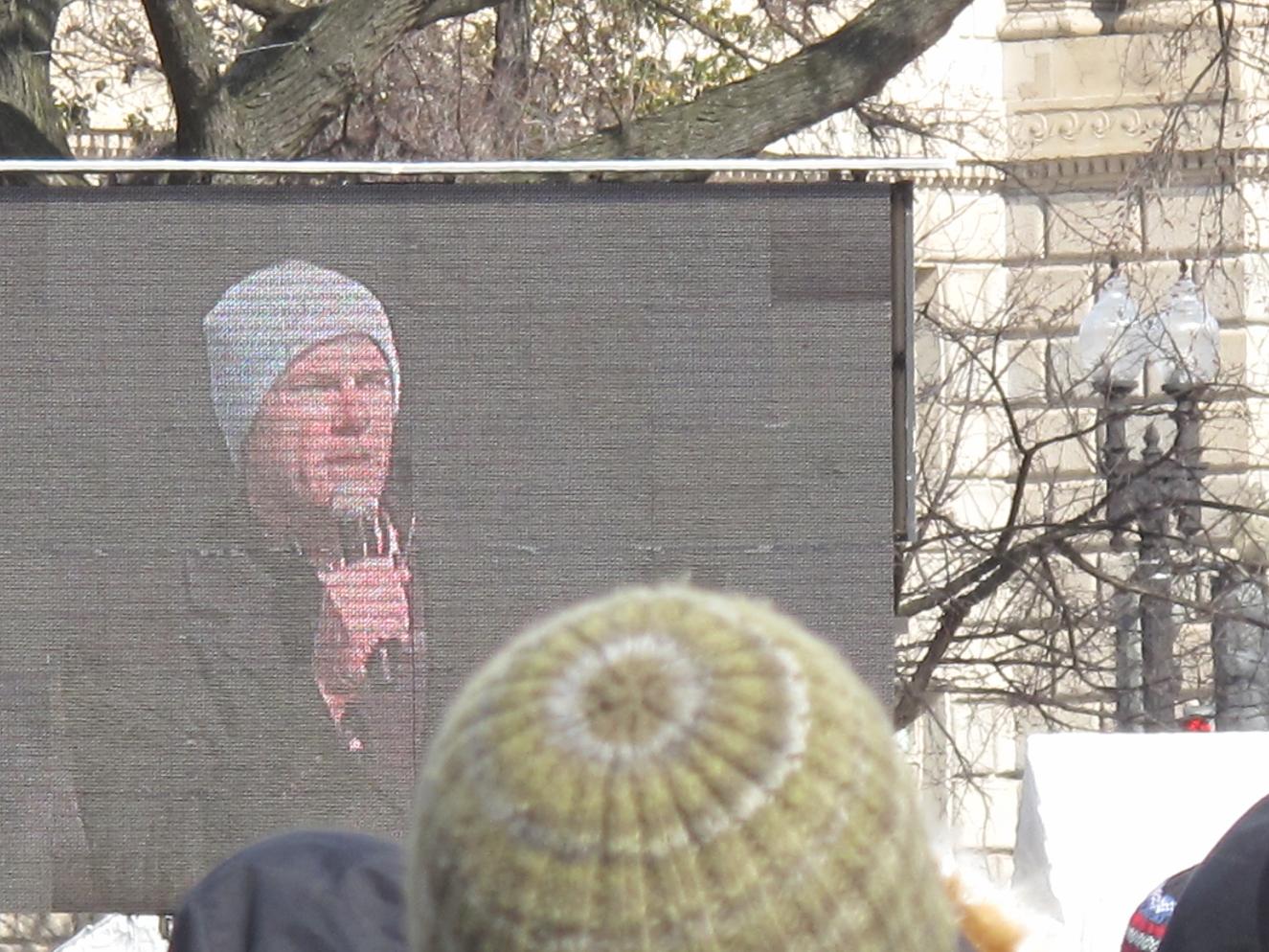 Michael Brune, Executive Director of the Sierra Club, spoke about the future of today's children and how Obama has the opportunity to make a difference.  Also impressive were three Canadian women who urged Americans to keep fighting the Keystone XL Pipeline and the development of the Tar Sands Oil Fields in Alberta, Canada.  The pipeline, proposed to go from Alberta through the American mid-west to the Gulf of Mexico, is considered the single most destructive proposal by the oil industry today, and was a major focus of the rally. 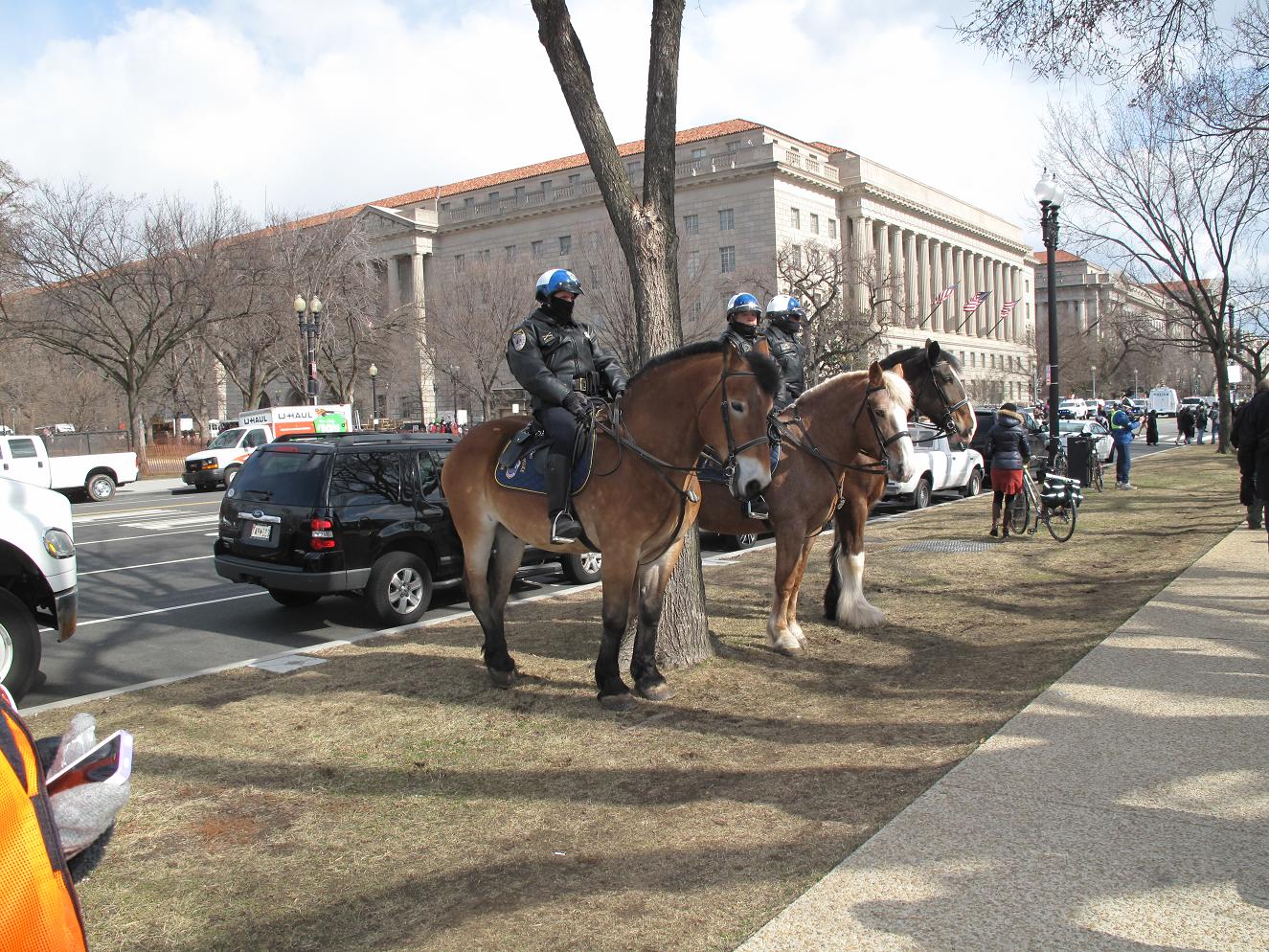 National Park Rangers, government helicopters, fire and ambulance crews, and police, kept watch on what was a very peaceable protest. 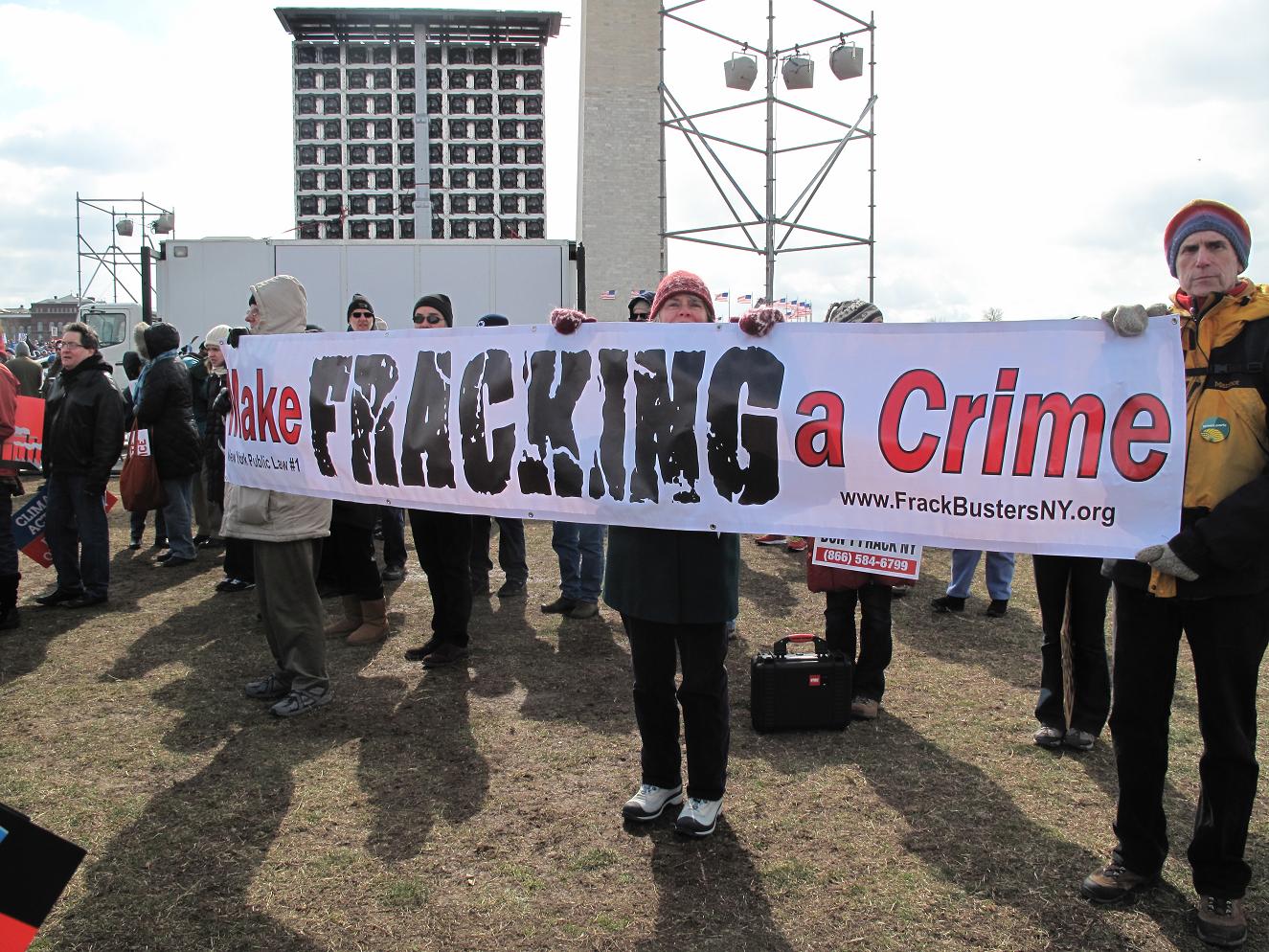 Here I am, nearly frozen, with Atlantic Chapter Sierra Club Executive Committee members Bob Ciesielski and Carl Arnold, holding up an anti-fracking sign.  Many people came by and took pictures of the sign which we held during the entire rally. 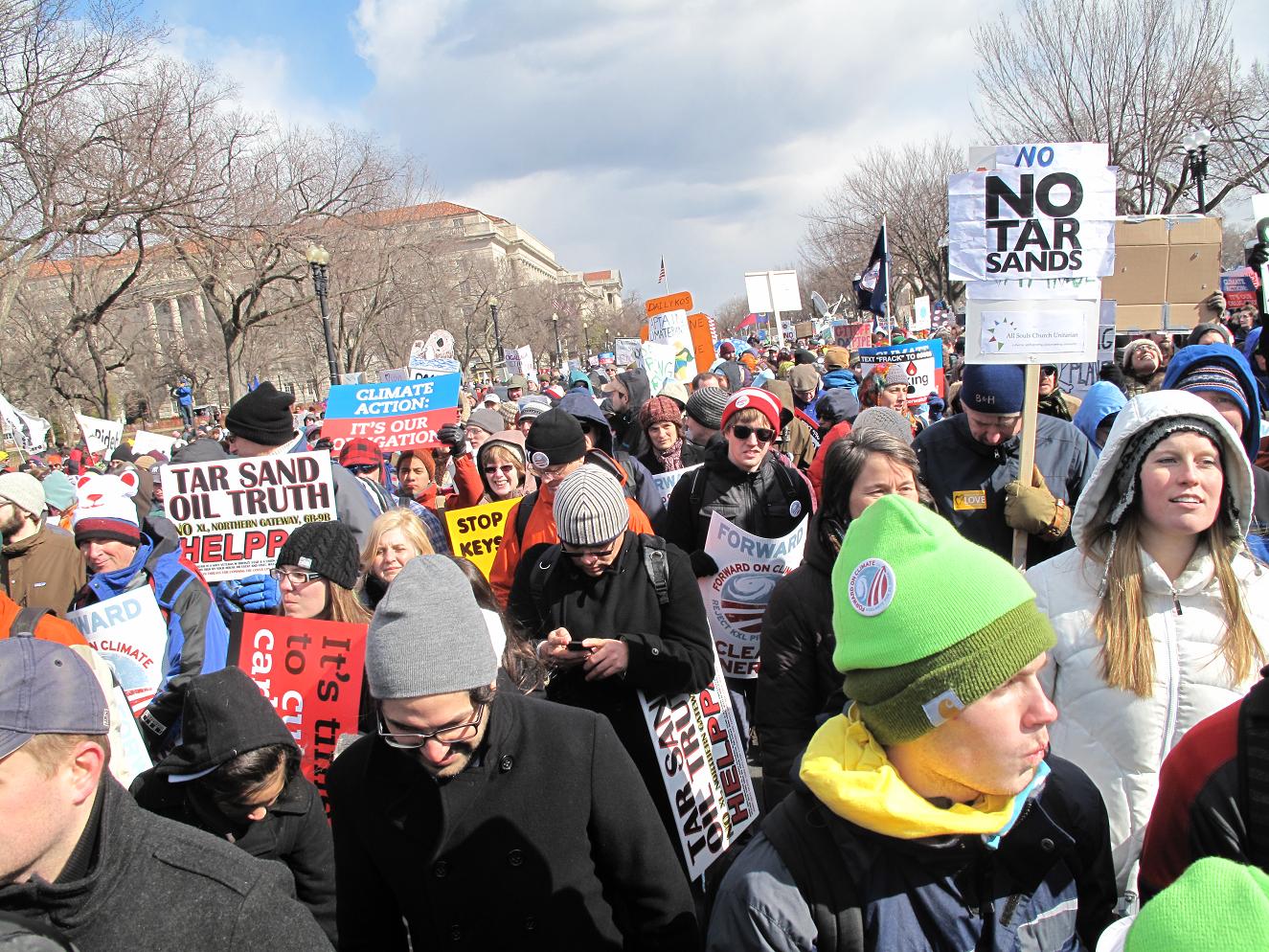 We folded up the sign once the march began along Constitution Avenue.  It was impossible to see the beginning or the end of the line. 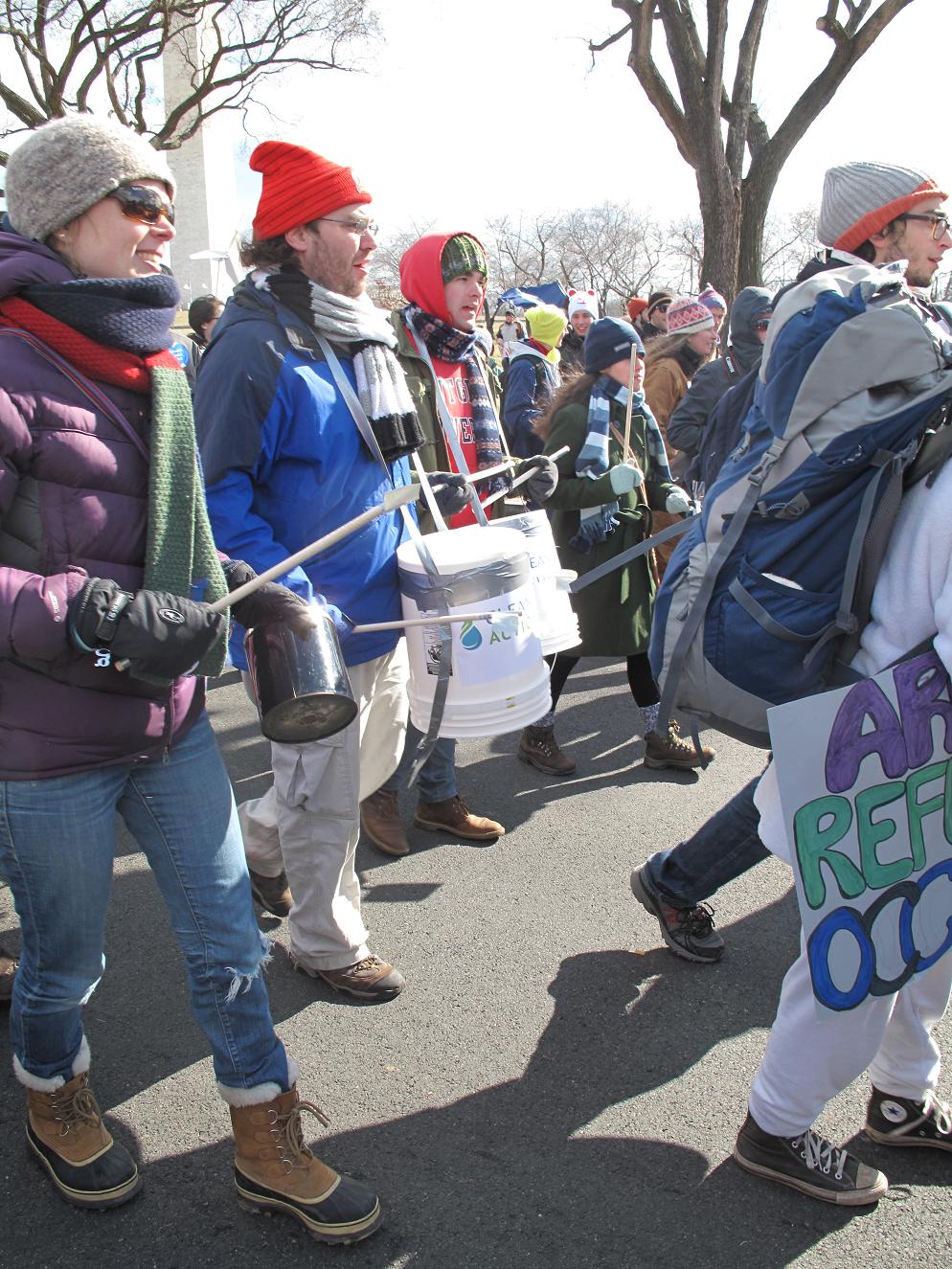 So many young people were part of the event...as it should be since their future is longer than ours and they have a powerful voice.  I stopped to take a picture of these folks drumming on homemade instruments. Within seconds, I had lost Bob and Carl in the crowd. 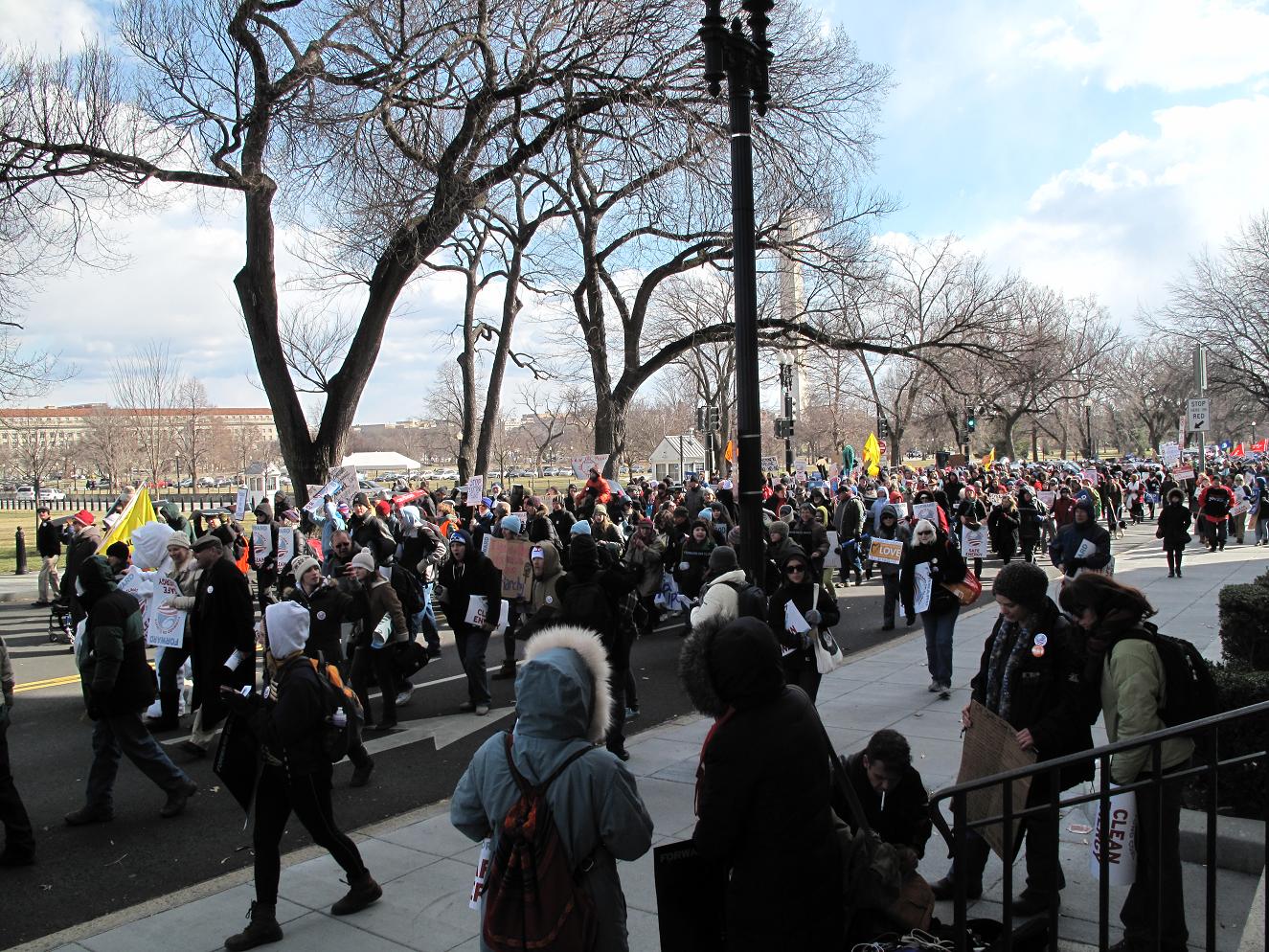 It didn't matter that I was on my own. Everyone was friendly, even as we stepped on or bumped into one another. And with all the people and the bright sunshine, the temperature seemed just a tad warmer. 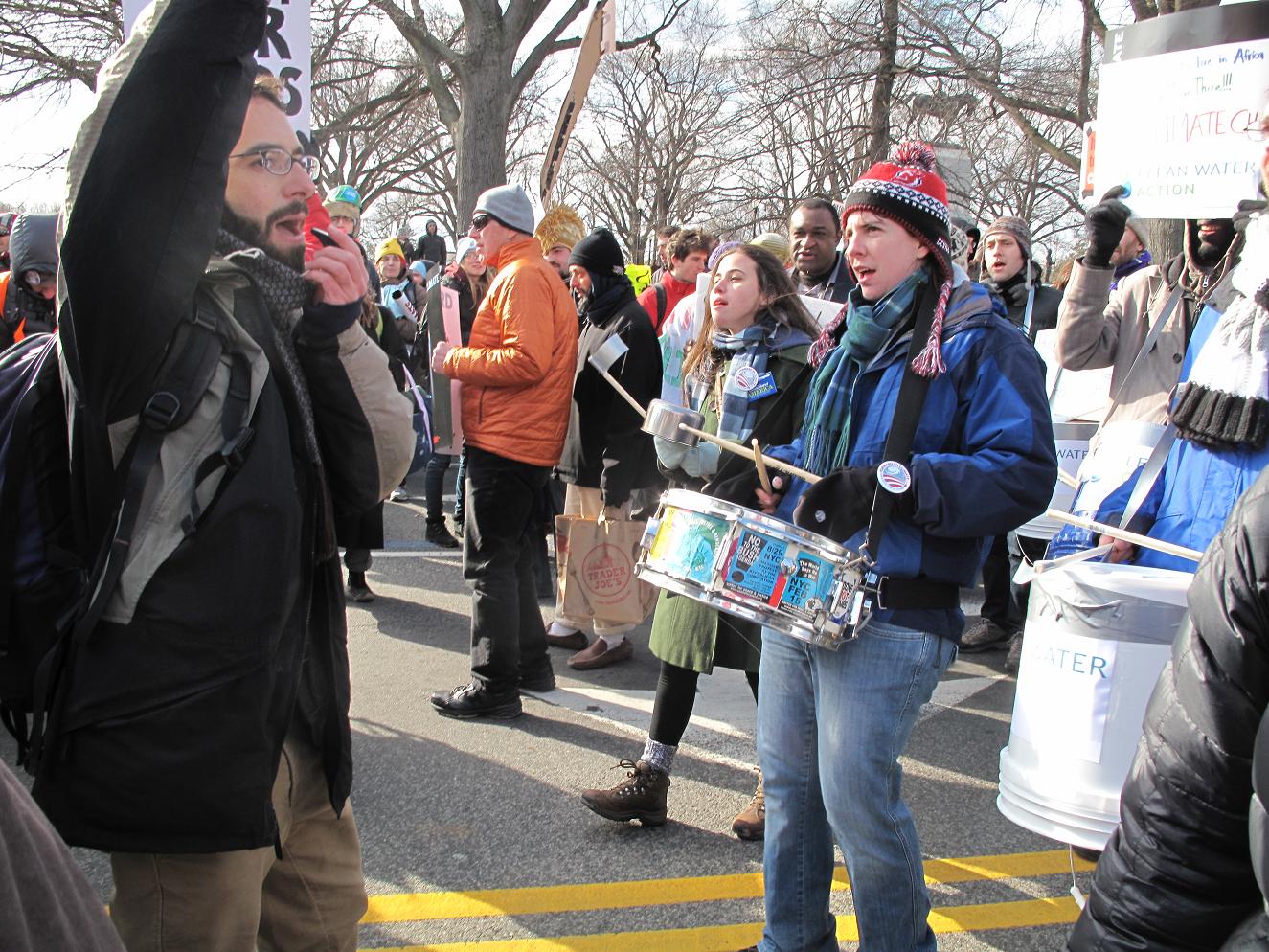 This young man at left actually led the makeshift band as he walked backwards. 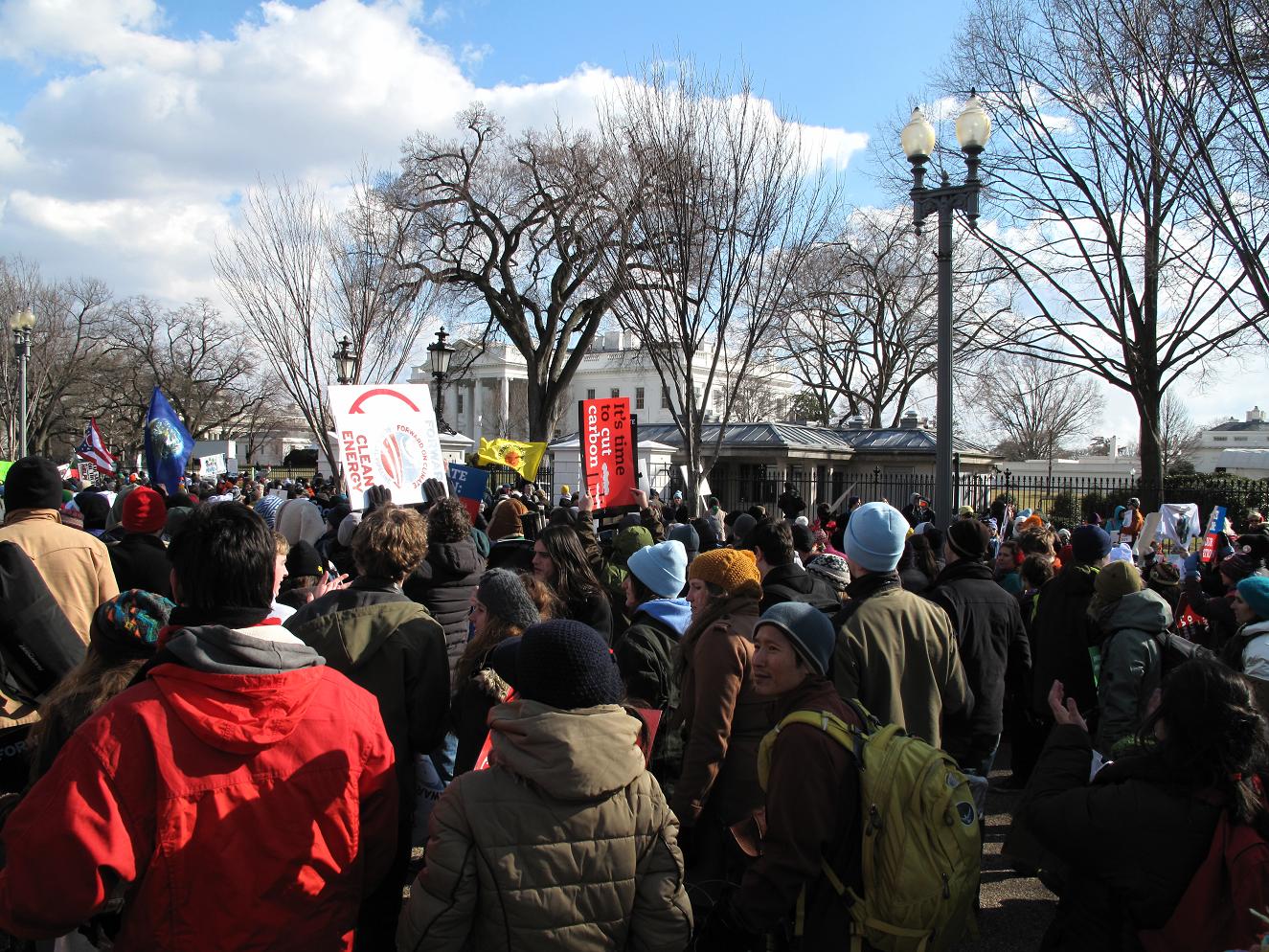 Destination White House!  I met Jessica Helm, a Sierra Club delegate from Long Island who is on the National Board, and walked with her for a little while. 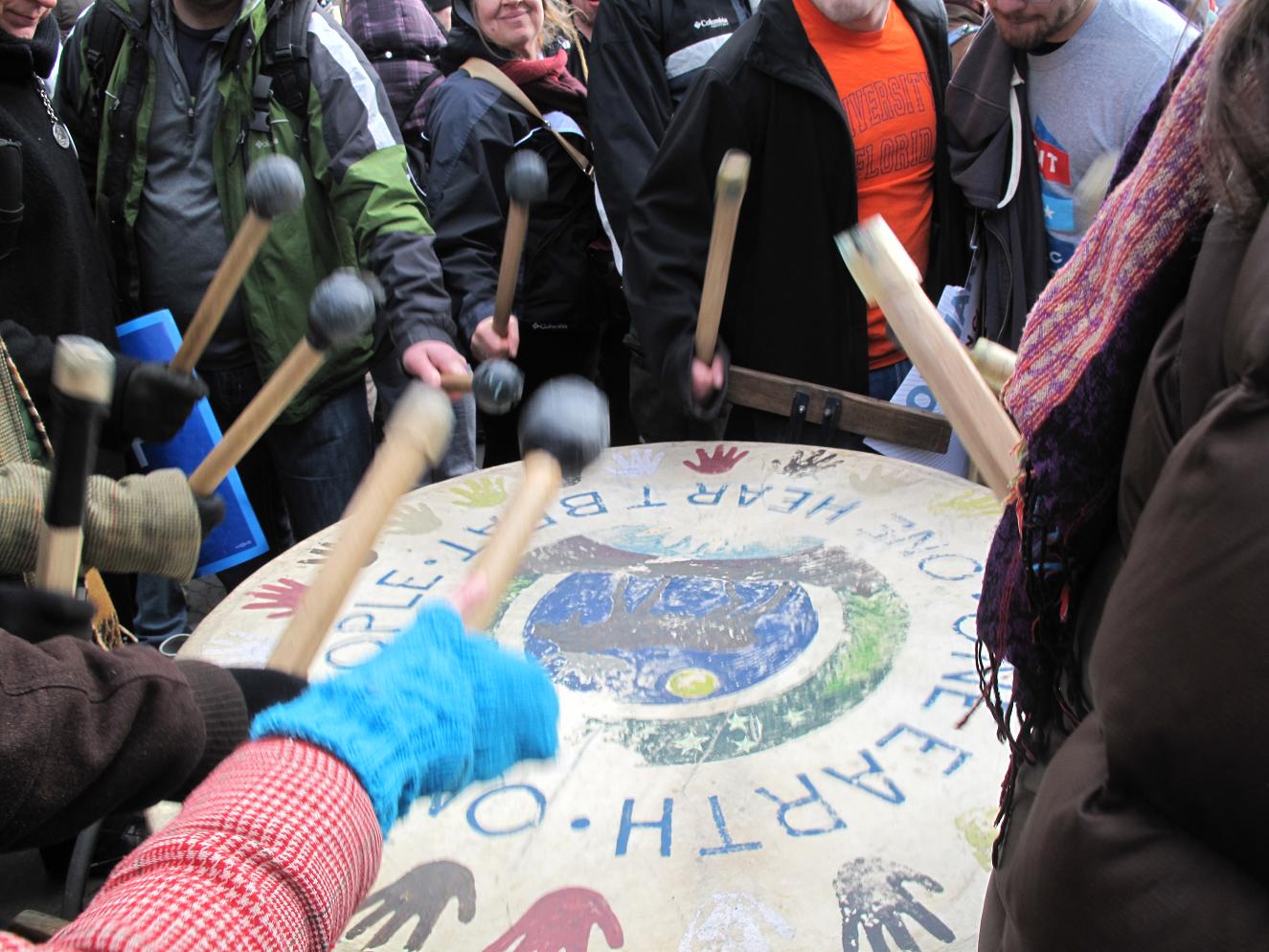 We were encouraged not to linger in front of the White House and continued on Pennsylvania Avenue back towards the Washington Monument.  I watched people playing rhythms on this drum as they walked. The drum says, "One Earth, One People, One Heartbeat."  A young man handed me a mallet and I joined in. 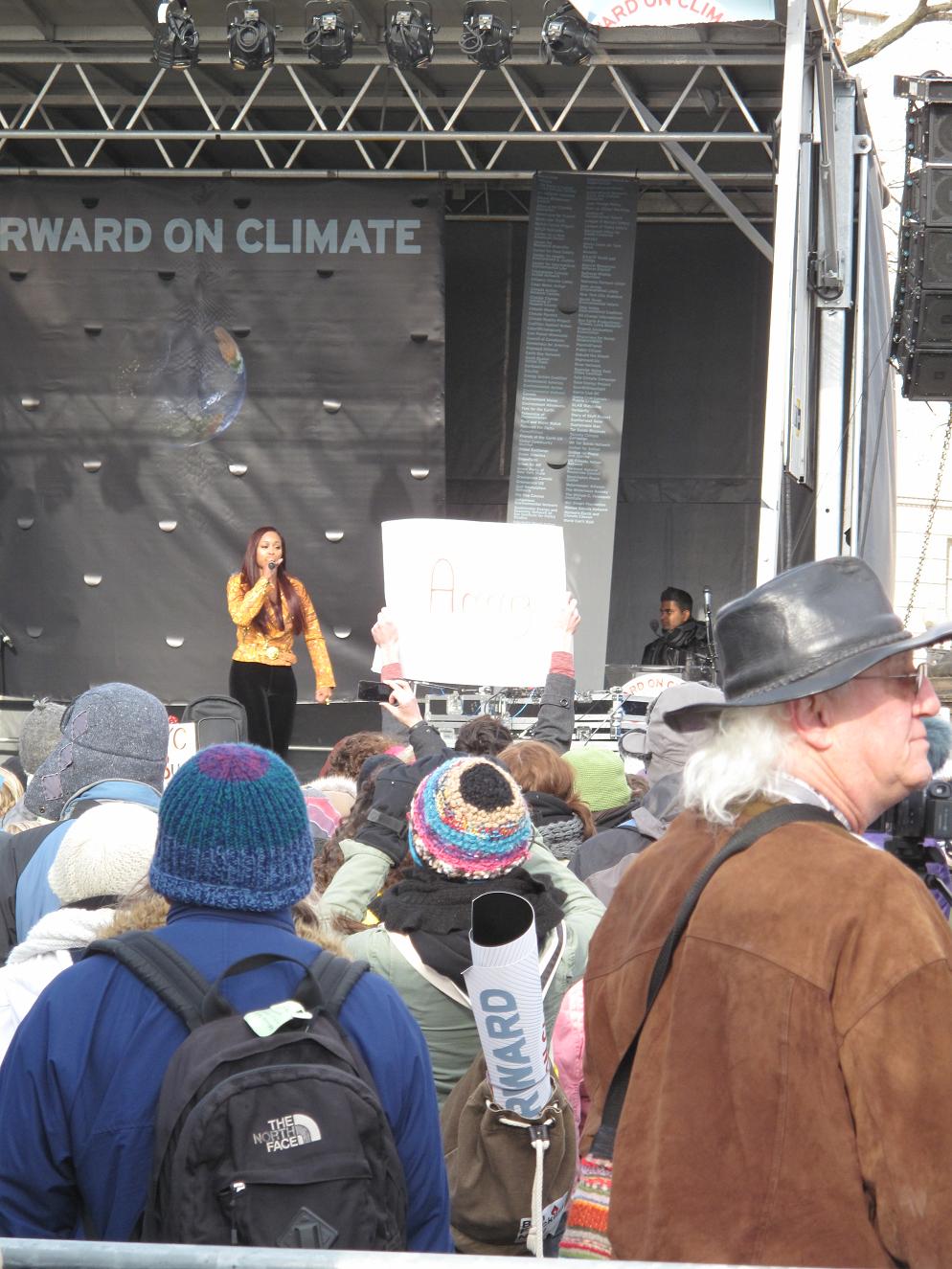 When the march came to an end back at the stage near the Monument, I thought I would watch for a few minutes.  Music and dancing were promised, to warm everyone up.  I only lasted through the singer, Eve, before I decided I had had enough of the cold and wind. 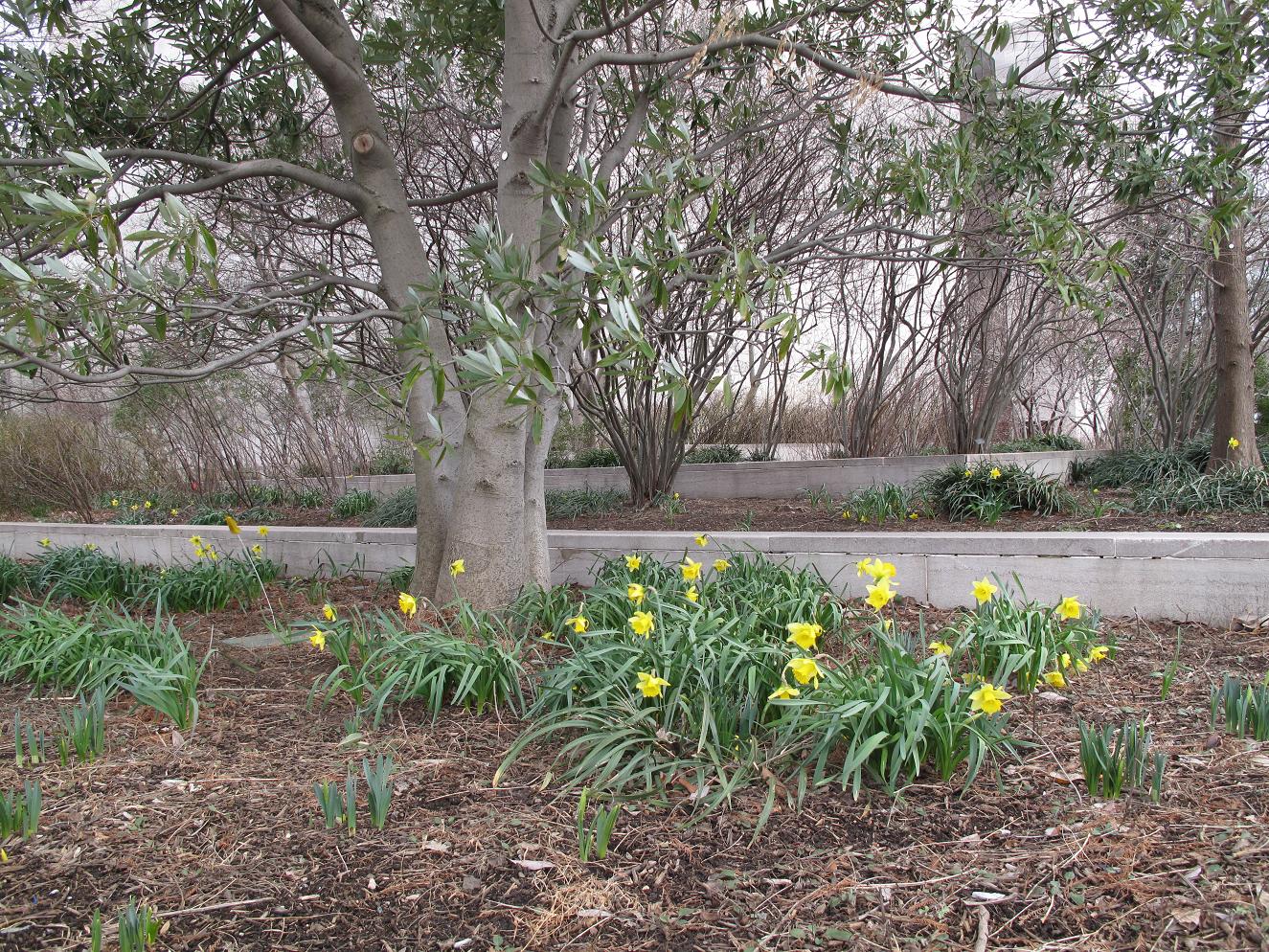 Walking back towards the Air and Space Museum, I passed these hardy daffodils braving the frigid weather!  By 5 p.m., I met up with Laura and Kevin and was back on the bus heading for Albany.  We arrived home just after 1 a.m. Monday morning.

While the rally was fascinating and it certainly energized my environmental sensibilities, it is hard to know how effective we were.  Regardless, I was glad to join those who want to be able to tell their children that we are trying to leave a stable and beautiful world for them.
Posted by Virginia at 3:21 PM 2 comments: