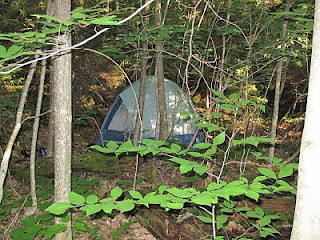 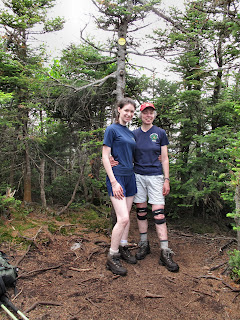 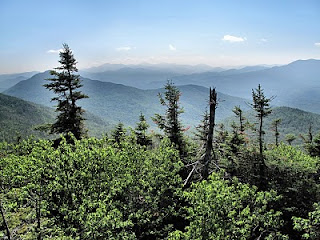 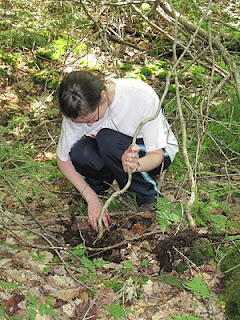 Meredith and I continued our journey towards hiking the 46 High Peaks of the Adirondacks this weekend in the Seward Range, known as one of the wildest areas in the Northeast. We put three of the range's four peaks on our weekend agenda: Donaldson, Emmons,and Seward. In bright sunshine, we drove nearly four hours to the trailhead in Coreys and then backpacked three miles.
We found a small area of flat enough ground within legal distance of Calkins Brook for our little tent. With brute strength, Meredith uprooted two maple trees to clear a space and then "appeased the tree spirits" by replanting them nearby(see photo).

Early the next morning we headed up the Calkins Brook trail, first climbing Donaldson. Temperatures began to rise, and with little breeze, I felt sluggish. Meredith, however, has gotten a daily workout in New York City, hauling her guitar, flute, music and other baggage, up and down subway stairs and across miles of the City to her Music Therapy home patients. She hiked with energy and ability.
From a rocky promontory, Donaldson has fabulous views looking east to the Great Range (photo above). Emmons, farther on, is an enclosed summit, but its trail faces west and south, opening occasionally to Long Lake and Tupper Lake far below. From Emmons, we returned to Donaldson, and then continued on over open rock faces with nice views to Seward where the summit is wooded (see photo above of two diesel women). Ranges like this in which mountains have to be done as a series are a challenge. This one, however, was manageable; we had no death-defying moments such as when we climbed Colvin and the trail suddenly disappeared into a hole that dropped thirty feet, or on Gray, where a rock face had a ledge just boot-width to walk on, reminding us that one gesture of imbalance could send us falling to broken bones.

Returning to our tent, we determined that we were the only people within eight miles--an isolation hard to imagine, especially given that Meredith would be back in her Upper East Side studio apartment in New York City the next evening. None of the few hikers we had seen during the day was camping in the area. In addition to the three miles that we had hiked in from the trailhead, five more miles of dirt road were between us and the nearest house.
The first night, I finally managed to get to sleep when Meredith tapped me on the head, "Are you awake?" she whispered. I grunted. "Good, listen," she said in a barely discernable voice. Her head was up, tense. I heard a rustling in the leaves. "It's a squirrel or a chipmunk," I said, not happy to be woken up; then I added unsympathetically, "We probably put the tent over its hole and it's trying to get home." I put my head back down, hoping to go back to sleep.
A few minutes later, Meredith nudged me. In a slightly exasperated tone, I said, "It's just a small animal. Hear how quick and light the movements are?" She jumped, exclaiming, "Something bumped my hand! It's freaking me out!" I had to face it, sleep would have to wait. "It's not a bear or anything, really," I said. I pulled my sleeping bag over my head, and soon heard her rhythmic breathing of sleep long before I, too, drifted off.
The second night, we were determined to sleep well after hiking eleven miles over three peaks, but distant flashes of lightning lit up the woods followed by rumbles of thunder, and a rustling of leaves began near my head. Meredith grabbed my arm. "The hike was easier than this," she lamented. When I mentioned years of previous camping experiences, she said, "I haven't camped in a long time." And, of course, I had mentioned a few times earlier, with great satisfaction, that we were at least eight miles from the nearest human.

Now I began to think that the animal could be bigger, maybe a porcupine or a raccoon. Curiosity got the better of me, and I sat up focusing my headlamp outside to the woods, hoping to see some interesting wildlife in its own habitat, but each time I shone the light, the noise stopped. All I saw were large toads. Finally, after a great scuffling, loud crackling, and thumping, I spotted the culprit--a tiny brown woodland mouse! It worked hard, pulling the label off one of our water bottles, its long tail winding over a log. It tugged and yanked, rolling the bottle in the leaves. After a good view and a few laughs, we both settled down and slept until rain pattered the tent roof.

We walked out the three miles to the car, occasionally singing along the way, and scaring a ruffed grouse who reprimanded us in full plumage. I was disappointed that the hot weather had made me listless on the mountains, but was pleased with the views and our camping experience including the wildlife. I am now a 36er. Meredith was happy with her agility and strength. She took many pictures of wild flowers and of the lake views. With a great sense of accomplishment, she is now a 30er! We drove back through the Adirondacks, chatting along the way, and stopped for the obligatory meal at the Noonmark Diner.

Ahh, those luscious red berries kissed by the sun. I picked lots this weekend, and then we gorged on them having our traditional strawberry shortcake dinner. Yup, strawberry shortcake for dinner and nothing else. I got this idea when the kids were little--a great reward for the picking--all the dessert you can eat. Some carbs, some fat, some vitamin C laden fruit. Who could ask for better?

In just over a half-hour of preparation, the buttermilk biscuits are baked, the cream whipped, and the berries smashed. Now that Thomas and Meredith are no longer around, Bill and I still enjoy this annual feast, but I won't tell you how many servings of strawberry shortcake each of us consumes at one sitting!

I have picked strawberries for as long as I can remember. My mother, sister, and I would go out to Baker's Farm, on Baker Hill, a farm community just off of Saratoga Lake. I didn't like picking; I was young, and I was slow. My mother picked the most, and my sister was almost as fast. To me it was a laborious morning, improved only with the promise of future earnings.

At home, my mother determined how many quarts we needed for the family and how many we could sell. My sister and I put the designated quart containers in our red wagon and trundled across the street to visit our elderly neighbors. We charged slightly more for the berries than we had paid, and the neighbors were thrilled to get them fresh-picked at a reasonable price, often adding in a tip. My mother settled the tally when we returned to the house--a neutral party between my sister who picked more of the berries, and me, who expected an even share of the profit!

When my kids were at home, we made regular pilgrimages for pick-your-own strawberries, blueberries, and raspberries. Now, my friend Linda is my usual picking companion, although I have sometimes coerced my husband to join me, or still now-and-then have the company of Meredith and my daughter-in-law, Marlie, if they are visiting.

Despite tonight's strawberry bacchanal, there are still plenty of berries in the refrigerator, enough for a dish at breakfast and a dish for dessert in the evening for a few days. Then it will be time to revisit the berry farm!
(For those of you who are local, I go to Altamont Orchards.)
Posted by Virginia at 8:36 PM 1 comment: 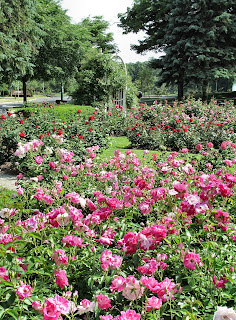 I met my friend, Terry, at the Central Park Rose Garden in Schenectady. Unlike Yaddo with its ordered garden, each rose bush equidistant from the other, surrounded by beautiful statuary and the new elegant pergola, Schenectady's rose garden is a riotous symphony of flowers, one bush melting into the next.

Terry and I admired the roses and then walked on a woodsy path deeper into the park, taking turns at whim, until we realized that all paths led to a giant pine. As if in awe, the other trees stood a few steps away giving space to the old one.

After continuing our walk into surrounding neighborhoods, we headed back to the rose garden where we spent several minutes sitting on a bench in the breeze, visiting, and gazing at the roses.

Last week, the final week of May, when I realized that roses were blooming, I was disturbed. It was a month too early. What did this say about our climate, our summer-like spring, our lack of snow over the winter? Erin, Education Director at the Pine Bush, said, "It is almost hard to enjoy the roses when we know that it is not good for them to be blooming now," and I agreed. I watched my white aromatic bush in the backyard bloom profusely, the red ones on the fence opened with just a touch of magenta, and the salmon-colored roses bordering my neighbor's property greeted the morning sun. I enjoyed them but I could not forget that something was wrong and this was the evidence.

Today, I knew I should come to this garden in Central Park, even if it was weeks early. I knew it would be beautiful as it always is. Terry and I compared the various pink shades, the yellows, and magentas, and then meandered into the shady rhododendrons, also out in full. We thought of all the volunteer hours that went into making this a haven and we appreciated the efforts of others. So, come to the garden, smell the sweet smells, and see the beauty of the rose.
Posted by Virginia at 8:32 PM 1 comment: