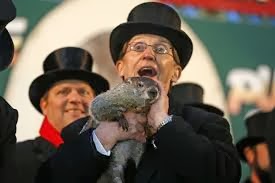 I have been confused about Groundhog Day for decades. I never quite get it until February 3, when I read Punxsutawney Phil's results in the Times Union. I know my newspaper will clear up many of life's mysteries--after all, my name is the same as the little girl's who learned in 1897 from the New York Sun that there really is a Santa Claus. Proof positive.

When I was little, living in Saratoga Springs, I knew that a man in a top hat holding a groundhog, or woodchuck as we called it, was really just a funny thing. And I understood that it certainly didn't tell us anything about spring, which we all knew would arrive around mid-April regardless what the woodchuck was supposed to be telling us, which I never really understood anyway.

I knew all about woodchucks, because my family spent a few fun early-summer Sunday afternoons a year woodchuckin' on farms in nearby Washington County. My father would knock on a farmhouse door and ask if the farmer would like him to hunt woodchucks in his fields. “Every farmer knows that a woodchuck hole can break a cow's leg. Farmers like to keep the woodchuck population down,” my father said, and we could see that that would definitely be true.

My mother, my sister, and I took off on cow paths up the hillsides, admiring the views and wildflowers, while my father went in another direction with his rifle. I loved running through the meadows. After a while, we would all meet back at the car and go home, refreshed from a woodchuckin' afternoon. I knew that we would never see a woodchuck in February.

The real confusion about woodchucks and their shadows came as I got a little older and learned that some people thought that spring might come in six weeks, mid-March, a very early date for spring to arrive, in my experience. And yet the story said that that would be a late spring. When I learned in school, that the weather-predicting woodchuck was Punxsutawney Phil who lived in Pennsylvania, I figured that seasons down there must just be different. End of story.

Then I read in The Saratogian, my own hometown newspaper, that the woodchuck predicted a winter ending in six weeks! I totally forgot about where Phil lived and what the significance of his shadow was; I was so surprised to think of spring coming to my neighborhood so soon...and then it didin't.  It arrived in mid-April as it always had.

From then on, I could never remember if the story told that six more weeks of winter meant an early or a late spring. Truth be told, I must have a total mental block because I still don't know from one year to the next.

Maybe it depends on what we call spring. The science of the Vernal Equinox aside, I have my own definition of what spring is. When I lift up the leaves on my garden around March 15 and see crocus shoots, that is a sign of spring, but it is not spring. Along about April 7, if I have my first blooming daffodil, that is spring. It's true, that we may have had warm days, the smell of damp mud, and even a sun burn by the end of March, but spring is when we're not likely to have much more snow. Even in these days of global warming, we sometimes get our biggest snowstorms around St. Patrick's Day.

Last Sunday, I saw on the television news that Phil had seen his shadow. That's cool, I thought, but wait, what does that mean? If it means that we have six more weeks of winter, does that make spring early or late? Didn't I figure this out last year, and the year before that? Am I, like, seriously, the only person who can't keep this straight? And should I be less concerned about woodchucks and more worried about my own cognitive inabilities?

On Monday, February 3, I opened the Times Union. My eye jumped right into the article about the groundhog story. Poor Phil “was roused from slumber at 7:28 a.m.” and “was sure of his weather forecast.”  There would be six more weeks of winter, but nothing was said about whether six weeks meant an early or late spring. Then I glanced back at the article's title which read: “Punxsutawney Phil predicts long winter.” Okay, I think I've got it...for now.

Don't even try to explain to me what happens to spring if Phil doesn't see his shadow.