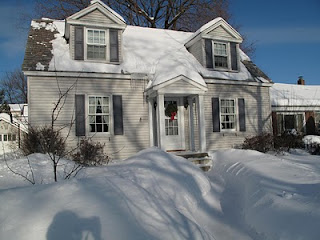 What are we going for--twelve days and twelve nights? thirty days and thirty nights??? And how do we remember our childhoods?

(Photo: A white Christmas, and a whiter New Year's!)

I remember my childhood much like this winter. We have not seen grass at our house since mid-December. Granted, our "white Christmas" was only a couple of inches, but the day after Christmas, we got our first big snow and it has been snowing ever since. 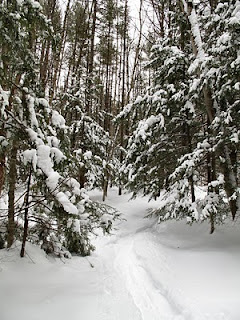 Every few days, another four to six inches.
Here in Albany, we have not had just one or two 20-inchers. Instead regular fresh coatings have kept the streets and sidewalks white, and the snowbanks have been growing ever higher.

(Photo: Every few days a fresh coat of white) 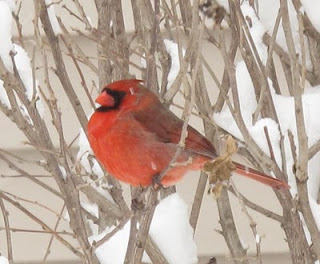 I remember walking to school, in my miniskirts (pants were not allowed for girls until I was in 8th grade) in subzero temperatures, my knees purple.

(Photo: "As long as the bird feeder is full, I really don't see a problem.")

We expected cold from mid-December until at least mid-February, when my mother would say, "There won't be much skating after Valentine's Day when the sun gets high enough to soften the ice." 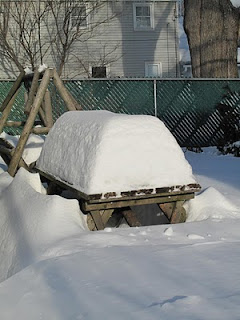 And groundhog day? I was always confused. I thought six more weeks of Winter meant Spring would come soon. In Saratoga, Spring never came as early as late March. There were always piles of snow left at the corners of the yard at Easter. We expected Spring in late April.

(Photo: Anyone for a picnic?)

Like Dylan Thomas, I might not remember things exactly as they were, but I know we in Northeast sure have had an old-fashioned winter this year, and we're enjoying it. There have been snowshoeing opportunities galore. We're going cross-country skiing this week and 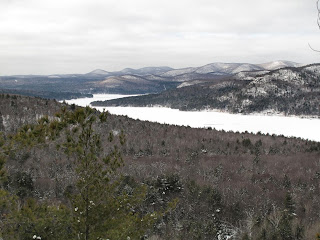 conditions should be some of the best ever.

I even spent a day in New York City, where watching residents enjoy their city was all the entertainment I needed. 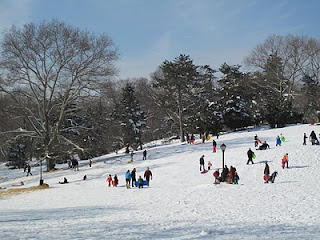 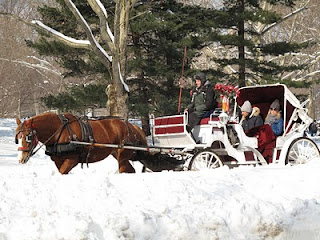 Oh, the day will come when the thermometer hits fifty degrees, and the sun will make us say, "it feels like Spring!" Someday, we will see grass at the edge of the driveway, and sniff the smell of wet earth. Early flowers will begin to bloom. But for now, those little Spring bulbs are sound asleep under a few feet of snow. 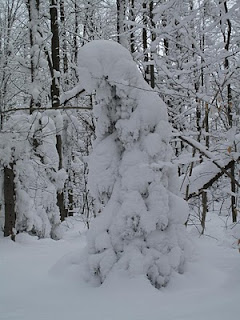 (Photo: Is there really green under there???)

Last Wednesday, when the Northeast shut down due to extreme weather, Bill and I began the day with pancakes. After shovelling, we made Castillian Hot Cocoa. Bill said, "Hibernating could have its drawbacks!" But who cared?--an extra pound or two would be tomorrow's problem.
Our new gas furnace kept us comfy, the view out the window was white from top to bottom, we had a list of indoor tasks, and the library had provided us with good books to read.
And, if there are six more weeks of winter, we'll be thrilled when the earth begins to awaken and Spring makes its appearance. In the meantime, Happy February to all my readers! 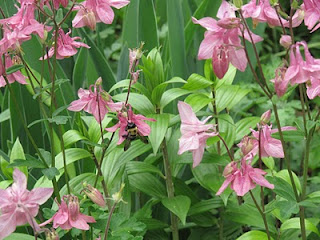