My friend, Peggy, grabbed the arm of my chair and rolled her eyes.  I tried not to giggle.  This was the most unusual piano recital I had ever attended, but at least now I understood how she and I fit into this mixed-up group. 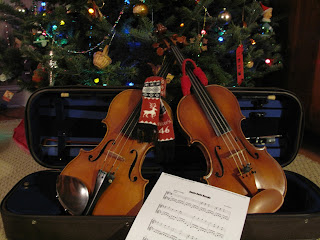 A few weeks before, Peggy and I were practicing Christmas violin duets to play for my parents, our third duet concert for them this year, when she said, with some hesitancy, "A friend of mine asked me if we could play our duets at her students' piano recital at the Beverwyck Senior Community."  Middle-aged women playing violin duets at a student piano recital?

"My friend, Shirley, is 99 years old," Peggy explained, "and she still teaches piano.  She thought we could add some variety to the program."  A 99 year old, still teaching?

I couldn't refuse.  If anything, I owed Peggy, since she is so generous, sharing music with my parents.  Still, I was baffled by what seemed like an incongruous concert.


We pared our Christmas repertoire of seven melodies down to four for the recital.  Our "interlude" was to last only 5 to 7 minutes.  We timed ourselves and would play "Silent Night" twice through, "Coventry Carol," "Simple Gifts," and "Jingle Bells Boogie," each once.

We both arrived appropriately early for the event, so Peggy pointed out various people to me. Shirley, who sat with her cane, held court.  Peggy went to speak to her, and I followed, thinking I would introduce myself.  I never got the chance. Shirley was surrounded.

Shirley's granddaughter, an attractive woman of about 40, seemed to be keeping track of the time and protocol.  Her young son, would play a violin piece at his great-grandmother's student concert.  Inclusion of a violin student, even with his family connection, was an additional clue that this was not a typical piano recital.


The recital began and piano students began to play.  All of their pieces were memorized, and they showed recital nerves, making occasional mistakes, but getting back on track a few measures later.  The audience, a mix of young parents, grandparents, and community residents, applauded for each student enthusiastically.

When the great-grandson stood up, violin in hand, a woman, who had been introduced earlier as hostess of the event as a resident of Beverwyck, sat down at the piano to accompany him.  The young boy played with confidence, but the accompanist could not stay with him.  She dropped out totally, coming back in at the wrong place, while the little violinist ran sixteenth notes up and down the violin's fingerboard.

When the piece ended, the accompanist apologized to the audience for not having had a chance to practice with the student.  She said that she hoped to do better on the second piece.  We hoped so too, but she did not.  It was worse.  By now, we wished the student were playing unaccompanied.  He plowed on. Peggy and I winced in pain.  I noticed that the student's parent had stopped recording the performance.

In the meantime, half a dozen adults and children opened the door quietly and came into the room.  They shuffled to the back near us, their feet inches from our open violin cases.  We both winced.  Chairs were brought in, even as students played.  We watched the feet of the newcomers and held our breath.


As the students played, I thought about our upcoming rendition of "Silent Night."  The song's real beauty, besides the melody and words, is its simplicity.  I began to think that this was not a good first piece for us.  I need a verse or two to relax when playing in front of people. "Silent Night" required a smooth gentle tone.  I worried that I might be a little shaky at first--too late to think about changing the order of our pieces now. They were printed right on the piano recital program.

And then the Beverwyck resident pianist returned.  She announced that she would play seven of the thirteen "Scenes from Childhood" written by Robert Schumann, and that she would describe each piece as she went along.  This is when Peggy gripped my chair. Whose recital was this anyway?  Everyone's, apparently!  The pieces and commentary dragged on.  Despite all, I suspected that the pianist may have been a very good soloist n her prime.

At long last, it was our turn.  I set up our stand and chairs, while Peggy gave a brief history of how we came to play together, having known one another most of our lives.

"Silent Night" went okay, not stellar, but passable.  "Simple gifts" was fun and lively. At "Coventry Carol," I confirmed with Peggy quietly, "Just once through?" She nodded yes, and we began.

The piece sounded good, in tune, but not quite right. We had determined weeks before that we would take turns playing melody or harmony and "Coventry Carol" required harmony from me. I forgot to drop down to the harmony, and we were both playing in a pure melodic unison, giving the piece a sort of angelic sound, but not what we had rehearsed.  When I eventually added the harmony, the music sounded so much more beautiful, that I wished we could play the piece twice.

Our final piece, "Jingle Bells Boogie," is pure fun.  Beginning with a swing harmony rhythm, the melody comes in with double stops, loud and lively, me playing melody this time.  To my surprise, Peggy began the opening rhythm twice as fast as we had previously practiced it. Fast is fun, and the piece is easy.  If she could keep the pace, I could too.

That horse raced with the open sleigh, zipping over the fields, and it was fun "to laugh and sing!"  At the end, we got a good round of applause.  One man called out, "Thanks, ladies!"  This concert had needed a bit of comic relief.

One student played after us, and then it was over.  I looked at my watch.  It had been a long concert.  What!?  We had only been here an hour?  Peggy spoke to a few people as she headed for the door.  This gave me just enough time to down two chocolate chip cookies from the refreshment table.

When we were in the parking lot, I laughed and said, "I couldn't believe the tempo you took for 'Jingle Bells!'  We flew through it!"  She looked nonchalant. "Oh," she said, "I didn't really think about it." And then she added, with a slight smile, "Anyway, it was time to be done."  It was, definitely.

In a few days, we are scheduled to play a morning duet performance for my parents in their Saratoga home.   "Silent Night" will be smoother, "Coventry Carol" will have proper harmony, and the horse in "Jingle Bells Boogie" can run as fast as he likes. 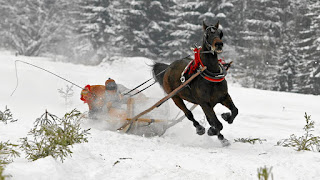