Ever since the slogan "Ithaca is Gorges," was a popular bumper sticker, I had wanted to explore the Finger Lakes region of New York State.  There are lots of gorges in the Finger Lakes, and Ithaca has its share, but Watkins Glen, billed as one of the most stunning places in the State of New York and one of the most popular state parks in the United States, sounded intriguing.

When my friend, Karen, and I discovered that we both had been wishing to visit the area, while our husbands were fairly disinterested, we teamed up in March and made lodging reservations for mid-September.

Camping is Karen's and my usual MO for overnights but we decided to pamper ourselves with "real" accommodations this time.  Looking online, I found Catharine's Cottages just south of Watkins Glen on Catherine Creek in Montour Falls.

At the same time, Karen discovered that the cottages were next to the Catharine Valley Rail Trail, a perfect 13-mile bike ride for us.  And so we took off with our bikes and hiking boots, leaving the tent and husbands behind.

Immediately upon arrival in the late afternoon, we checked into our cottage and, with rain in the forecast, had a quick snack, hopped on our bikes and headed for the Catharine Valley Rail Trail and into the village of Montour Falls.
The crushed stone trail was picturesque between lush green forest.  When it opened onto the streets of Montour Falls, we were unsure which direction to choose to see the two waterfalls we had read as being within the village itself.  A policeman, noticing our dilemma, pointed to our left for one and to the right towards the second on the edge of town.  He also suggested perusing the historic section of town.
Shequaga Falls was literally around the corner.  A sidewalk between two historic houses led to a small park with a direct view of the falls.  While the waterfall was beautiful, I wondered about the wisdom of building so close to this much powerful water.  Yet, these houses had been here for nearly 200 years.
We were attracted to an 1840 house with its meticulously maintained property, multiple additions tucked beneath old trees, and a stone's throw from the falls.
We continued on to Aunt Sarah's Falls a mile farther north and on a busier road.  This waterfall was less dramatic and in a less picturesque location.
Back on the bike trail, we hoped to ride the few remaining miles to the town of Watkins Glen, but thunder not far away and a darkening cloud cover forced us to turn around.  We returned through the historic neighborhood but didn't linger as more thunder rumbled.  Cruising into our cottage's driveway and lifting our bikes onto the protective porch, we were glad to be indoors just as rain arrived in earnest.

It rained all night and continued into the morning.  Even as we pulled into Watkins Glen State Park, rain pounded the car's roof.  Fortunately, as predicted, it let up shortly after we went through the park's gate.

Karen and I loved walking the 1.5 mile Gorge Trail with its 19 waterfalls.  I was also taken with the serpentine rock formed over thousands of years by the rushing water.

In addition, man-made rock work was spectacular.  The Civilian Conservation Corps, a back-to-work program as part of Roosevelt's New Deal, constructed trails and stone work in over 800 parks in its 9-year existence.  Although very familiar with the CCC's work at home and elsewhere, we wondered how men survived the dangerous trail and bridge construction next to or above tumultuous waterfalls and the roiling river.

Rainbow Falls has it all: a delicate waterfall that sprinkles the tourist who walks beneath; the fast billowing Glen Creek; a flight of stone steps that rise to a stone bridge; and the water-carved limestone and shale sedimentary rock formed over 10,000 years.  Rainbow Falls' beauty has made it the most photographed waterfall in the park.

At 60 feet high, the Central Cascade is the tallest waterfall in the park.  Might the bridge builders here have been afraid they might slip and tumble?  Every turn in the path held new fascination for us.

And what about those 832 steps throughout the gorge?  As veteran hikers, Karen and I had no trouble climbing them. We had brought our hiking poles, since we were new to the park and hadn't known what to expect, but we did not need them.

We ended our stair climb at Jacob's Ladder, which alone is comprised of 180 steps.  At the top, we took the Indian Trail, making a loop return to where we had begun.  After watching our steps on rocks and stairs in the gorge, it felt good to stride right along on this pretty trail.

And just as we made our final ascent to the parking lot, the sun came out in earnest.

Once out of the park, it didn't take us long to decide to stop at Captain Bill's and get tickets for a 50-minute boat ride on Seneca Lake.  The water sparkled under the sunny blue sky as we boarded the Seneca Legacy.

The lake has a long human history from the Seneca Indigenous Nation to today.  We saw a mix of historic periods from the boat.  Earliest was the diagonal line on these horizontal cliffs.  This Native American path provided an escape route from Seneca Lake in times of danger as well as access to the lake for fishing and water travel.
Later came the steamships from the 1830s to the 1920s, zigzagging back and forth across the water for business, shopping, visiting, and tourism.
I was surprised to see salt mines in two locations on the lake near the town and was a bit unnerved by the smokestacks at both ends of the waterfront.  I was reminded of the Greenidge Plant on the north end of Seneca Lake.  Once an environmentally dirty coal-burning plant, Greenidge now burns fracked gas for cryptocurrency mining sparking new environmental battles.
We also saw plenty of beauty.  Hector Falls tumbles directly into the lake and iconic farmland dots the shoreline.  We had a perfect afternoon to enjoy being on the water. 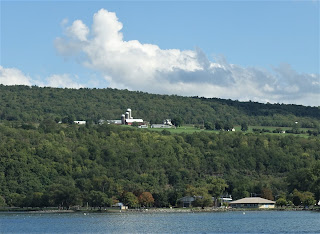 Back at our little cottage, our thoughts turned to dinner.  With some research and a few phone calls, we chose Horseheads Brewing in Watkins Glen where we had a delicious meal by the marina with views of the lake.
The next day we took the advice of our friend, Trisha, who had recommended a drive through Amish and Mennonite farmland on the west side of Seneca Lake.  What a great suggestion! 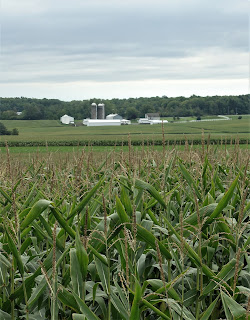 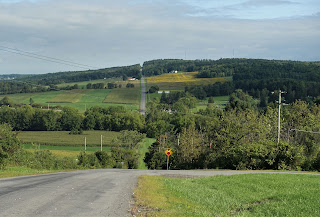 We toured beautiful countryside, taking short jaunts on back roads to get deeper into the landscape.  Occasionally, we saw an Amish buggy or passed a schoolhouse with bicycles parked alongside. 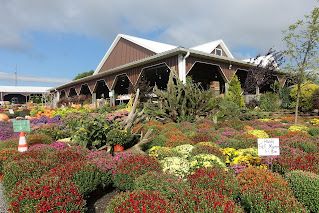 We stopped at this lush Mennonite farm stand with its bounty of mum plants.  Once inside, the overwhelming aroma of grapes greeted us.  This is wine country after all! 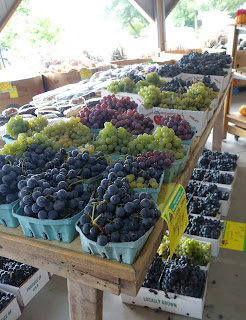 Boxes, barrels and shelves overflowed with produce from the early fall harvest.  Bins of tomatoes and peaches had us imagining Mennonite or Amish wives canning food for winter in their large kitchens, not to mention sauce simmering for dinner or a fruit pie warm out of the oven. 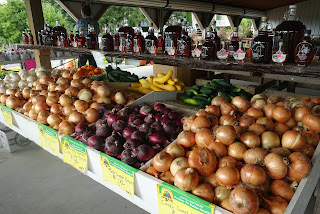 Having brought our bikes along for the drive up the west side of Seneca Lake on the recommendation of a woman at the Watkins Glen Visitor Center, we continued north.  She had suggested that we bicycle the Keuka Outlet Trail from Penn Yan to Dresden.  This 6-mile path runs between Keuka Lake and Seneca Lake. 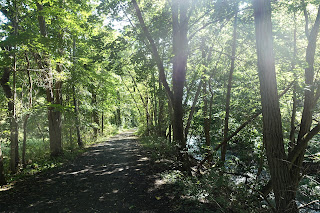 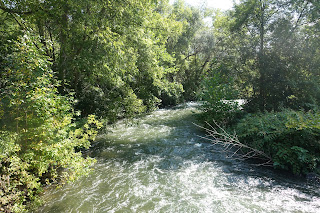 Although the rail trail began as a beautiful stone dust ride through woodland and along the "outlet," it quickly deteriorated, at times just a foot-wide dirt track, other times rubbly.  Twice we had to lift our bicycles over large fallen trees.
Despite the trail's poor condition, we wanted to see its highlights: Seneca Mill Falls and Cascade Mill Falls.  As soon as early settlers saw the potential for hydropower available here, industry grew.  Ruins of the Seneca Paper Mill offer a glimpse of the past.
The trail ended in Dresden where we turned around and headed back to my car in Penn Yan.
True to character, Karen had researched ice cream locations and found Penn Yan's Seneca Farms.  Seneca Farms' homemade ice cream with their own hot fudge made a tasty ending to our Finger Lakes adventure.