A Visit to Churchtown Dairy

I had never heard of the Churchtown Dairy before my sister gave Bill and me a Christmas gift certificate for the shop there.  We checked out the website and chose August as a good time to visit the Dairy, when the farm would be lush and productive.   According to the website events calendar, tours are only on Saturdays. We definitely wanted to go on a tour.  Last week, our calendar and the Dairy's calendar fit together perfectly.

The drive to Churchtown, just a few miles from the City of Hudson, was just under an hour. We arrived early at the farm which gave us ample time to wander through the gardens and to peruse the farm store before the tour began.

In the 1980s, as farmland in Columbia County became a high commodity for development, Peggy Rockefeller (wife of David Rockefeller) purchased more than 3000 acres of farmland as it came on the market, saving many farms in the Hudson Valley.  Two-hundred-fifty of those acres became the Churchtown Dairy.

Peggy and David's daughter, Abby, had a vision for the 250-acre parcel.  In 2008, she began sharing her dream for a dairy farm with builder, Rick Andersen, giving him one command, "it has to be beautiful." It took four years to complete the drawings for the project, but by 2014 the buildings and dairy were operational.

The flower garden that I had admired upon arrival was constructed a little later, in 2017.  Tours specific to the garden are on Wednesdays, when the gardener, Jean-David Derreumaux, explains the healing qualities of the plants and aspects of biodynamic gardening.

Biodynamic gardens are created in harmony and beauty with the land and nature, abiding by such methods as planting and harvesting with the cycles of the moon.  This colorful and aromatic garden with its water feature, benches, and a gazebo tucked behind climbing plants, seemed the perfect place to escape from the pressures and stresses of today's world.

I asked the guide if people request to have their weddings here.  She said, "They may, but we don't host weddings."  And, I thought, there isn't the financial need to do so. 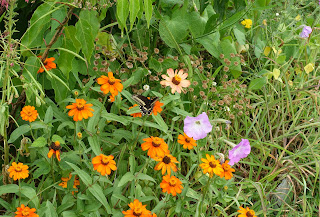 Thirty primarily Brown Swiss cows graze the Dairy fields, rotating from one field to another daily.  Ongoing rotations do not exhaust the soil which then can continually regenerate, a feature of a biodynamic farm model. Churchtown Dairy also raises about 30 grass-fed beef cows in a separate field.

Our guide wanted us to understand that, while most cows have their horns removed while young, the cows here do not.  Their horns pose no safety concerns for the farmers, since the small number of cows have plenty of space to roam.  She also explained how the cows use their horns. Sometimes one will affectionately stroke the head of another with a horn.  She described a cow who used her horn to move an object that was in the way.  Keeping the cows relaxed and happy are all elements of maintaining a respectful farm family.

We walked away from the garden toward the Round Shaker-style barn and the cow barn.  I was astonished that these buildings, that appear as if easily 100 years old, were only constructed in the last 7 or 8 years.  With slate roofs, pristine white paint, and charming dormers and cupolas, how could anyone afford to build such a farm?  Our tour guide reminded us that this was not just a farm; this was a Rockefeller Trust Property.  The builder had ample funds to "make it beautiful."

The Round Barn is an object of beauty and practicality.  In the winter, when snow covers the grassy fields, the cows come here to eat.   As a bank barn, in this case with a man-made hill to the second level, both the upper and the lower floors can be accessed from ground level.

Hay baled in the traditional rectangular cuboid shape is loaded into the barn's upper level.  When the cows come into the lower level through another entry, the bales are easily dropped to the barn floor, then loosened and spread onto the floor's outer circle where the cows await.

Outside of the building, I had admired the pointed design on the roof.  When I came inside with the tour group, I was stunned by the magnificent star motif at the roof's pinnacle.  Warm natural wood comes together in a design that creates art out of the practical need for a ventilation system in the barn's ceiling. 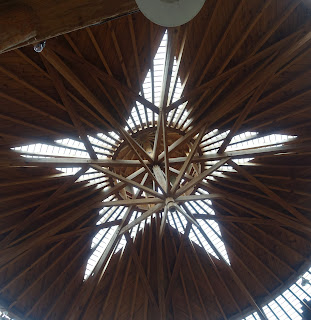 A milking barn, attached to the Round Barn, was reconstructed from an 1850s barn in New Hampshire.  In temperate seasons, the cows spend almost all the hours of the day outdoors, coming in only to be milked morning and evening.  For these two brief periods, they eat hay and a small amount of grain.  When the milking is finished, they go back outdoors where they consume fresh grass in the fields day and night.

Generally, the calves are born in the field. Despite the common thought that a large number of births require human or veterinary intervention, this is rarely the case.  If a cow doesn't return to the barn in the morning, a farmer walks into the fields to see that all is well.  After a day or so, the cow will come to the barn, with her calf alongside, and rejoin the others.

There is no rush to separate calves from their mothers, unlike at most modern farms where calves are moved to the calf pen within 24 hours of birth.  At the Churchtown Dairy, mothers and calves stay together for a few weeks and reunite regularly once the calf moves to the calf pen, another aspect of biodynamic farming that promotes happier and healthier animals.

As our tour ended, a few families arrived to watch the milking.  What a great educational opportunity for children!

Raw milk is an important product of the Dairy.  Legal certification to be a raw milk producer requires maintaining a rigorous sanitation and hygiene program, along with weekly testing for pathogens.  In addition, the milk goes directly from the cow into containers, rather than through tubes and systems to a milk tank.  This avoids the excess use of cleaning chemicals.

In the store, I asked if people came from miles around for the raw milk.  "Yes, they do," she said. "Even if they have farms that produce raw milk closer to their homes, they often prefer our milk because it has passed the meticulous certification process."

Bill and I contemplated how we would use the gift certificate my sister had given us.

Besides milk, beef, and medicinal or luxury products made from the flowers, cheese is a reason to shop here.  A fresh creamy cheese, two types of Camembert, and a semi-hard cheese are cave-aged at the farm and are very popular.  The shop also sells books and gift items, some made by local craftspeople.  In the end, we brought home two cheeses and a "supernatural washable paper insulated lunch bag." 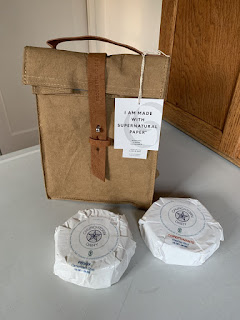 It was dinner time when we left the Churchtown Dairy and we were hungry.  One option, if we had thought ahead, would have been to bring a picnic.  Another is to visit nearby Hudson with its many shops and restaurants.  Or you may do as we did, and stop at a familiar restaurant on the ride home.